A naked man in Florida has been arrested after allegedly stealing a marked police car and crashing it into a wooded area.

Officials from the Jacksonville Sheriff’s Office in Florida told the Associated Press that Joshua Shenker, 22, was arrested on Thursday after police responded to reports of a naked man running along Interstate 10 shortly before noon.

When officers responded, Mr Shenker was seen lying naked in the road before he then ran across the highway lanes towards the police, the department claimed on Thursday.

Authorities confirmed that Mr Shenker stole a vehicle belonging to the City of Jacksonville, while First Coast News footage showed that it was a marked police car. The department did not reveal how the vehicle was stolen.

The police report revealed that around $10,000 (7,309) worth of damage was done to the vehicle that Mr Shenker crashed into a wooded area next to the highway.

Mr Shenker was taken to a local hospital as a precaution on Thursday, and the department noted that he was suffering from road rash after lying naked on the highway.

Ellis Burns, the assistant chief at the sheriff’s office, told WJXT that officers suspected that Mr Shenker was “possibly intoxicated or high” as they told him that the 22-year-old appeared to be in a state of “excited delirium”. 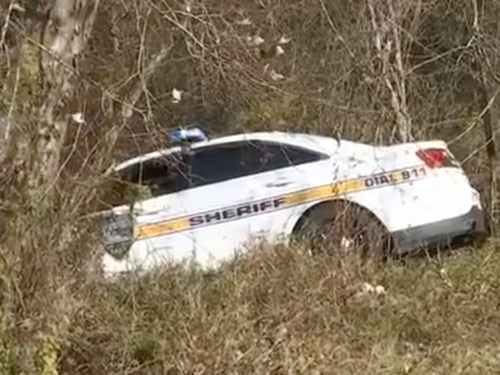 The assistant chief added that Mr Shenker was “fighting officers. He had no clothes on, he’s able to run to the car and fight one of our officers.”

The 22-year-old was charged with theft of a motor vehicle, depriving an officer of means of communication or protection, aggravated battery on a law enforcement officer, and resisting an officer without violence.