Naomi Biden, the oldest grandchild of Democratic presidential nominee Joe Biden, took to Twitter on Wednesday to defend her father, Hunter, amid a storm of political attacks against her family.

Earlier in the day, Senate Republicans released a controversial report on Joe and Hunter’s former business dealings with Ukraine. The report alleged that Hunter’s work in Ukraine constituted a conflict of interest for the Obama administration at a time when Joe was embroiled in foreign policy as vice president. Ultimately, though, the investigation found no evidence of wrongdoing or improper influence. Senate Democrats had attempted to block the report from being published, claiming that it was only released in an effort to taint Joe’s campaign ahead of Election Day.

In a lengthy Twitter thread, Naomi, 26, explained that she wanted to shed light on who her dad really is, “free of charge to the taxpayers and free of the corrosive influence of power-at-all-costs politics.”

She began by describing the closeness of her dad and her late uncle Beau Biden, the former attorney general of Delaware, who passed away in 2015 from brain cancer. She wrote, “Hunter and Beau were one. One heart, one soul, one mind.”

Naomi recounted her father’s dedication and sacrifice as a young law student and father who worked tirelessly for his family and never sought the spotlight. After fulfilling his dream of graduating from Yale Law School, Naomi wrote that he “put his dreams on hold to take a job that would ensure that anything was possible for me and my sisters. He used that money to pay off not only his own student loans, but my uncle Beau’s college and law school loans so that he could pursue his dreams too.

“When my uncle got sick,” she continued, “my dad never missed a single doctors appointment or chemo treatment. When he got sicker, my dad lived out of a suitcase and slept in the chair next to his hospital bed for two months. He held his hand as he lost his brother and a big piece of himself too.” 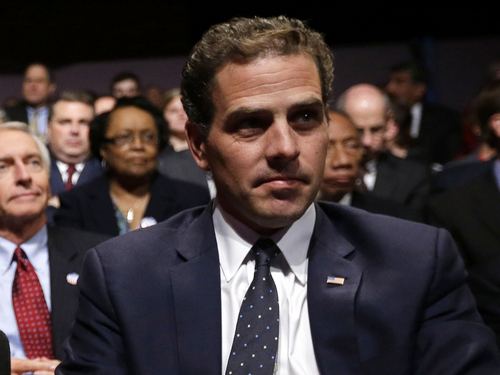 The loss of his brother, Naomi wrote, was heartbreaking for Hunter, who had also lost his sister and his mother in a tragic car accident years prior.

“The pain he has endured would be enough to make a lesser man give up on life all together,” she said. “But despite the best efforts of an cruel few to destroy a private man, he is sober, happy, and as at peace as ever today because as long his family needs him, he has not lost his purpose.”

Naomi followed in her father’s footsteps by earning a degree from Columbia Law School in May, during a virtual ceremony where her grandfather was a guest speaker. She regularly uses her Twitter platform to show support for Joe and to condemn the Trump presidency.