Sobol was detained in December when she appeared outside the home of alleged Federal Security Service (FSB) chemical weapons expert Konstantin Kudryavtsev. Navalny and the open-source investigative group Bellingcat said Kudryavtsev was part of an FSB squad tasked with his poisoning and cleaning up the crime scene last August.

Navalny, who was sentenced to prison in Russia after returning from months of recovery abroad, published a viral video of a phone call where he tricked Kudryavtsev into divulging key details of the poisoning. The FSB dismissed the Kudryavtsev call as a “provocation” aiming to discredit the agency.

A Moscow court on Thursday found Sobol guilty of criminal trespass and sentenced her to one year of community service, according to Interfax.

Sobol’s lawyer Vladimir Voronin told reporters that they will appeal the sentence. 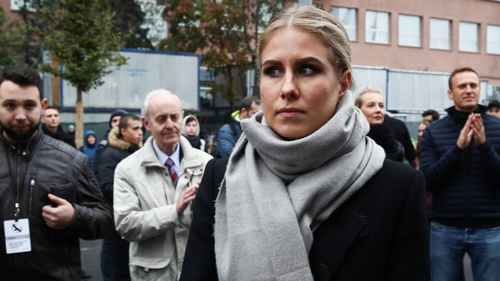 Sobol appeared in court wearing a shirt reading “Where is the criminal case into Navalny’s poisoning?”

Sobol was also placed under house arrest alongside several other Navalny allies earlier this year for “inciting mass violations of sanitary and epidemiological rules” by calling for rallies demanding Navalny’s release.

Last month, a court eased those restrictions to allow Sobol to attend church and take her daughter to school.

Navalny is serving a 2.5-year sentence for violating parole during his recovery from poisoning abroad on old fraud charges that he calls politically motivated.

A Moscow court has sentenced one of jailed Kremlin critic Alexei Navalny’s allies to two years in prison for two tweets critical of the Russian government, the Mediazona news website reported Thursday.

Pavel Zelensky, a camera operator for Navalny’s Anti-Corruption Foundation (FBK), was detained in January on charges of inciting extremism online. The accusations stem from anti-government tweets he posted after the self-immolation death of journalist Irina Slavina after police searches at her apartment in October.

Moscow’s Tushinsky District Court found Zelensky guilty of incitement and sentenced him to two years in a penal colony, according to the Mediazona independent news website.

The state prosecution had reportedly requested a 2.5-year sentence for Zelensky.

Zelensky’s wife told the Open Media news website that he plans to appeal the verdict.

Mediazona reported that Zelensky had pleaded guilty, with other Navalny allies speculating that officials may have subjected him to physical and psychological pressure to do so. Zelensky’s wife had told Mediazona in February that he pleaded guilty in hopes of mitigating his sentence after he learned his mother was sick with the coronavirus.

The outlet added that Interior Ministry experts found signs of extremism in Zelensky’s tweets, one of which called for readers to take to the streets to express their anger.

Navalny and FBK have been a constant thorn in the side of Russian officials, several of whom have found themselves the subjects of the group’s popular video investigations alleging high-level corruption. Several Navalny allies are under house arrest on charges of violating coronavirus restrictions for urging protests calling for Navalny’s release earlier this year.

Rights groups have accused Russia of applying the extremist label to opposition material as it increasingly criminalized online content in recent years.

Navalny, 44, is serving two and a half years in a notorious prison colony on charges of violating parole of his old suspended sentence for fraud. He is currently on hunger strike to demand proper medical treatment.

Navalny accuses the Kremlin of ordering his poisoning attack with the Novichok nerve agent last August. The Kremlin rejects the accusations and says there are no grounds to investigate Navalny’s poisoning. 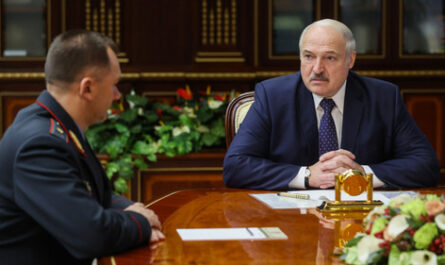 Lukashenko Warns Belarus Protesters He Will ‘Take No Prisoners’