Russia’s main Kremlin critic Alexei Navalny was back in court Friday for allegedly defaming a World War II veteran, after being ordered to prison in another case that sparked global outrage and mass protests in his country.

The hearing came a little over one week after the 44-year-old opposition leader, a persistent thorn in President Vladimir Putin’s flesh, was sentenced to serve nearly three years in jail.

Heavily-armed riot police surrounded the court and set up cordons outside.

Navalny is accused of describing people who appeared in a video — including the 94-year-old veteran — promoting constitutional reforms backed by the Kremlin as “the shame of the country” and “traitors” last June.

The charges currently carry a maximum penalty of two years behind bars.

During a theatrical trial Friday, the opposition figure sparred with the judge and prosecutor and mocked the veteran’s grandson. The judge repeatedly reprimanded Navalny for his behavior. 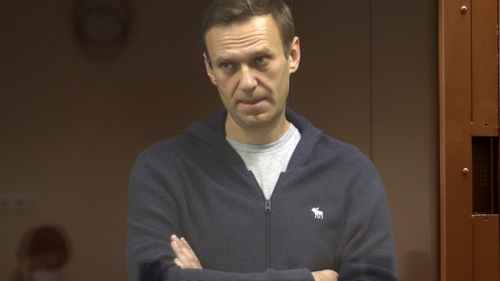 His lawyer Olga Mikhailova called on the court to allow media in the courtroom and accused the judge of bias, asking that she be removed from overseeing the hearing.

“Stop shaming yourself and enrol in some courses to improve your knowledge of the laws of the Russian Federation,” Navalny said.

Later, he again accused the veteran’s grandson of “selling out” his grandfather.

When the prosecutor began reading out the frail veteran’s testimony, the court heard a detailed description of his wartime experiences in Soviet-era Belarus.

When Navalny interjected, saying the veteran’s memoirs had nothing to do with the proceedings, the prosecutor continued to read.

His lawyers said Friday they had filed an appeal.

Russia’s penitentiary service had accused Navalny of breaking the conditions of a suspended sentence for fraud by not checking in with authorities while he was recovering from a nerve agent poisoning attack in Germany that Navalny says was ordered by Putin.

Navalny’s arrest on arrival back to Russia last month sparked nationwide protests that saw more than 10,000 people detained and led to allegations of police abuse. Navalny Says ‘Everything Fine’ in Message From Jail