The brother and aides of jailed Kremlin critic Alexei Navalny were placed under house arrest on Friday ahead of new rallies, as Russian authorities warned that protesters could face charges of taking part in “mass unrest.”

Moscow police also announced that on Sunday, when the fresh protests are planned, movement in the center of the Russian capital would be limited and seven central metro stations closed.

Kremlin critics say authorities are dramatically ramping up pressure on the opposition in an effort to intimidate protesters and smother dissent.

Navalny’s plight and the increasing crackdown on dissent in Russia has sparked an outcry in the West, and the UN Security Council is set to meet informally on Wednesday to discuss Navalny, diplomats said.

Navalny’s team has urged new protests, suggesting residents of Moscow gather on Sunday in Lubyanka Square outside the headquarters of the FSB security agency and Staraya Square, where the presidential administration has its offices.

The coordinator of Navalny’s Moscow office, Oleg Stepanov, and Anastasia Vasilyeva, head of the medical workers’ union critical of the government, were also placed under house arrest for two months.

Oleg Navalny has already served three-and-a-half years in prison for an embezzlement conviction that Kremlin critics say was politically motivated. He was released in 2018.

The pressure on Navalny’s family and associates grew after tens of thousands of Russians rallied last weekend in support of President Vladimir Putin’s most vocal domestic critic.

More than 4,000 protesters were detained last weekend and authorities launched a number of criminal probes. Several Navalny associates, including Sobol, were detained following police raids on their apartments and offices.

The Investigative Committee announced Friday that Leonid Volkov, head of Navalny’s regional network based in the Lithuanian capital Vilnius, was wanted on charges of calling minors to join unauthorised rallies.

A spokesman for Moscow police refused to provide more details of the planned movement restrictions on Sunday when reached by AFP.

Moscow eased coronavirus restrictions this week but officials refrained from lifting a ban on mass gatherings.

Prosecutors and police have repeatedly warned Russians against participating in “unauthorized” events and on Friday, the General Prosecutor’s Office upped the ante, saying that demonstrators could face charges of mass unrest if protests turn violent.

In a message from jail, Navalny on Thursday urged Russians to stage new rallies.

“The majority is on our side. Let’s wake them up,” he wrote from Moscow’s Matrosskaya Tishina, a high-security detention center.

Police detained the 44-year-old anti-graft campaigner at a Moscow airport after he returned to Russia on Jan. 17 from Germany, where he had been recovering from a near-fatal poisoning with Novichok, a Soviet-designed nerve toxin.

A makeshift court at a police station last week ordered Navalny placed in custody until Feb. 15. 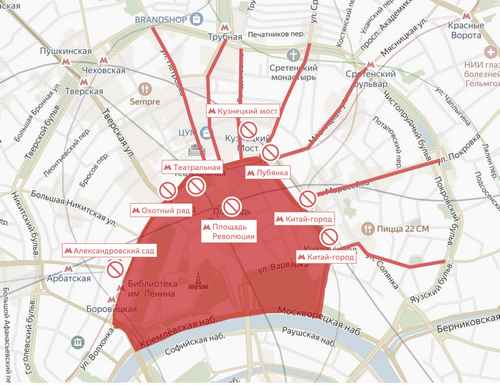 Map of roads and metro stations that will be closed in Moscow at the time of the protest Sunday. Cafes and bars will also close and the sale of alcohol will be restricted. Russian Interior Ministry

On Thursday, a court rejected an appeal by his lawyers to release him from custody ahead of a high-profile trial set to begin on Tuesday.

He is facing charges of violating the terms of a 2014 suspended sentence and could be jailed for two-and-a-half years.

Many protesters say they are angered by Navalny’s jailing after the attempt on his life he blames on the FSB domestic intelligence service.

Others were incensed by the findings of Navalny’s investigative report claiming that an opulent palace was built for Putin on the Black Sea coast.

The two-hour report on the palace has racked up more than 100 million views.

Navalny’s report forced Putin to deny that he or his relatives own the property.

‘Tsar should have a palace’

On Friday, Meduza, a popular Russian-language news site based in Latvia, released its own investigation into the seaside mansion.

One of the people involved in building the residence said the Russian leader should live well.

“A tsar should have a palace,” the unidentified person was quoted as saying.

Russian state television Friday tried to rebut opposition claims the Black Sea property near the city of Gelendzhik was a luxurious palace by airing footage of it under construction.