Kremlin critic Alexei Navalny is facing a court hearing to prolong his detention in the police station where he was taken immediately following his Sunday evening return to Russia.

The 44-year-old opposition leader flew back to Moscow after spending several months in Germany recovering from a poisoning attack that he said was carried out on the orders of President Vladimir Putin.

The opposition leader’s aides and lawyers said they were denied access to him for nearly 15 hours after he was detained, and his spokeswoman said they were give one minute’s notice before Monday’s hearing began at 12:30 p.m.

Here are the live updates:

14.05 Dozens of police officers have gathered in front of the police station where Navalny’s court hearing is being held, according to footage from MBX Media.

13.55 The court hearing has gone on a 50-minute break. The judge granted Navalny’s defense 30 minutes to familiarize themselves with the case, and 20 minutes to talk to the client.

13.50 Navalny asked to grant journalists accreditation and access to cover the ongoing court hearing. “They (journalists) are not physically accredited, which indicates a very strange bias. Of course, I advocate that this process is as transparent as possible, so that all media have the opportunity to observe this amazing absurdity that is happening here. I want … real journalists who are right now standing outside the gates in the cold to be allowed in. You cannot, excuse me, pretend that this is not happening..” Navalny said. 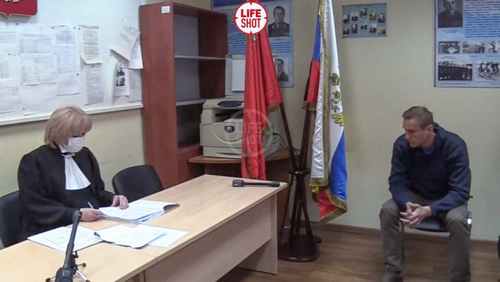 13:13 Only journalists from the pro-government Life Shot tabloid and the state-run Rossia television channel have been allowed into the room, Navalny’s spokeswoman said.

12:58 “Why is the court hearing taking place at the police station?… I’ve seen a lot of mockery of justice, but it appears that the old man in the bunker Putin is so afraid that he demonstrably ripped the penal code apart. This is lawlessness of the highest order, I can’t call it anything less,” Navalny said in a video published by his spokeswoman.