The team representing Russian jailed opposition leader Alexei Navalny has called for a new anti-government demonstration, on the same day that the country’s foreign ministry branded them “NATO agents”.

Leonid Volkov, a Navalny strategist, encouraged people across Russia to gather in residential courtyards on Sunday evening and to turn their phone lights on in protest against the nation’s leaders.

In a Facebook post on Tuesday, Mr Volkov explained that this type of rally would allow more people to demonstrate, as riot police are less likely to break them up than mass street protests.

He told citizens to arrange their phone torches – or candles if they prefer – in a heart shape and to post pictures, taken from from above, on Instagram on Valentine’s Day.

His words come after 11,000 demonstrators were detained across Russia during two weekends of nationwide protests.

These rallies, the largest seen in the country for years, started after Mr Navalny was detained following his return from Berlin on 17 January.

The opposition figure was subsequently jailed for almost three years on the charge of violating his parole for a previous money-laundering conviction, described by the European Court of Human Rights as “arbitrary and manifestly unreasonable”.

At the time of his alleged parole breach, he was recovering in Germany after he had been poisoned with Novichok, an attack which the Kremlin is thought to have ordered.

Mr Volkov said last week that no more mass street protests would be arranged for the time being, so as to prevent more people being arrested.

Explaining the campaign’s new approach to its anti-Putin protests, he said: “We have already become the majority, but Putin divides us by (riot police) cordons so that we can’t see each other and see how many of us there are. We need to find a way to overcome that.”

In response to Mr Volkov’s comments, a Kremlin spokesperson told reporters that it was “hard to say” whether the courtyard gatherings would be deemed unlawful.

Maria Zakharova, the department’s spokesperson, also claimed that representatives from the EU, UK and US had met with Navalny supporters on Monday to give them advice on how best to undermine the Russian government. 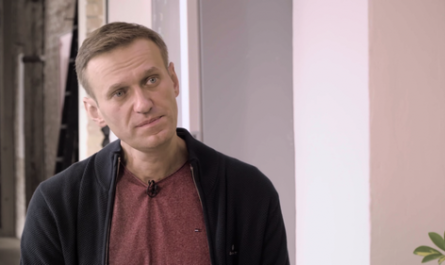 Navalny Says Hopes for Return To Russia Within ‘Months’