The 44-year-old Navalny, an anti-corruption investigator who is the most prominent critic of President Vladimir Putin was arrested Jan. 17 upon returning from Germany where he spent five months recovering from a nerve-agent poisoning that he blames on the Kremlin. The accusation has been rejected by the Russian authorities.

Russia’s penitentiary service alleged that Navalny had violated the probation of his suspended sentence from a 2014 money-laundering conviction that he has rejected as politically motivated. It asked the Simonovsky District Court in Moscow to turn his 3 1/2-year suspended sentence into one that he must serve in prison.

Navalny and his lawyers have argued that while he recovering in Germany from the poisoning, he could not register with Russian authorities in person as required by the terms of his probation. Navalny also insisted that his due process rights were crudely violated during his arrest and described his jailing as a travesty of justice.

Navalny’s jailing has triggered massive protests across Russia over the past two weekends, in which tens of thousands took to the streets to demand his release. Many protesters also chanted slogans against Putin. Police detained thousands of participants each time. Some were beaten. 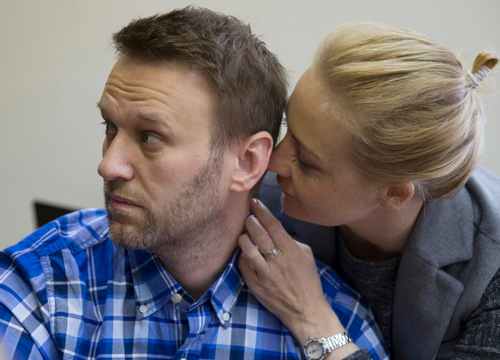 Navalny’s team has called for another demonstration outside the Moscow court building on Tuesday. Police have deployed in force near the court building and cordoned off nearby streets.

Kremlin critic Alexei Navalny called on his supporters Thursday to fight fear and free Russia from “a handful of thieves in power,” in his first detailed comments since being ordered to serve out a prison sentence.

The 44-year-old anti-corruption campaigner, who was jailed Tuesday on old embezzlement charges, wrote on Instagram that the authorities could only retain power if Russians remained afraid.

“But we, having overcome fear, can free our homeland from a handful of thieves in power. Let’s do it. We must do it.” 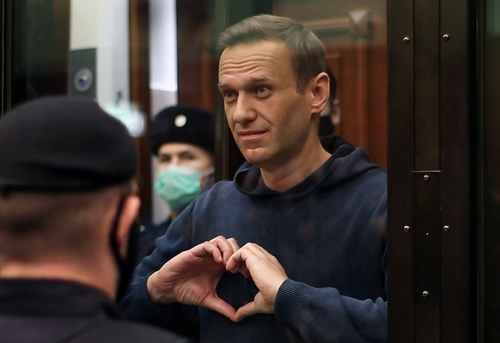 Navalny returned to Russia last month from Germany where he was recovering from an August poisoning attack with the Novichok nerve agent.

He blamed the poisoning on Russia’s security services and President Vladimir Putin.

Navalny’s arrest on arrival at an airport in Moscow sparked massive demonstrations across Russia which saw law enforcement arrest more than 10,000 people and spurred allegations of police abuse.

“The clear lawlessness that I have been subjected to from the moment I stepped off the plane is Putin’s revenge on me personally,” Navalny wrote.

A court in Moscow imprisoned him Tuesday for two years and eight months at the request of Russia’s prison service, which said he had violated the terms of the 2014 suspended sentence for fraud.

“The iron doors slam shut behind me with a deafening clang, but I feel like a free man, because I am confident I am doing the right thing, because I have your support and the support of my family,” Navalny said. Troops seen on streets and internet cut as protests continue