The National Guard was activated in Minneapolis on Wednesday evening, as protests and looting took place after false reports said that a murder suspect had been shot and killed by police officers.

On Wednesday afternoon, a man and woman were approached by another person in a car park in Minneapolis, Minnesota, and a confrontation broke out between the three of them.

After a brief confrontation, the man allegedly shot the person who confronted them, before the couple fled the scene, according to the Daily Mail.

The woman was taken into custody by police not long after, but when officers approached the man outside the Nicollet Mall in the downtown area of the city, he pulled out a gun and fatally shot himself.

Soon after, false rumours spread that the murder suspect had been fatally shot by police, and protesters gathered in the city just months after the death of unarmed black man George Floyd, who died while in police custody in Minneapolis.

Mr Floyd’s death sparked protests in every state in the US in opposition to police brutality against African Americans, and Black Lives Matter protests have been taking place across the US for the last three months.

Demonstrations have also taken place across the US this week, after officer Rusten Sheskey of the Kenosha Police Department, Wisconsin, was filmed shooting Jacob Blake in the back seven times as he held him by his shirt. 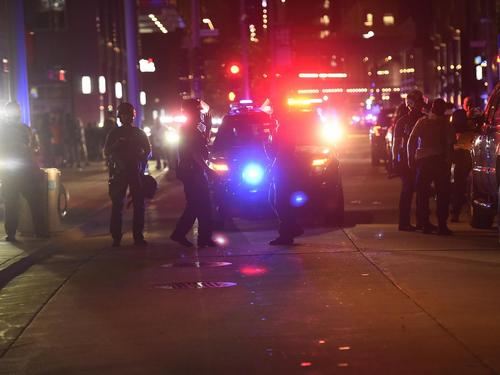 On Wednesday evening, as looting took place across the city, a curfew was called by mayor Jacob Frey, as Minnesota governor Tim Walz activated the US National Guard to help control the crowds and announced a peacetime emergency.

Mr Walz did not confirm how many service members were deployed, but told reporters on Thursday morning that 150 Minnesota State Patrol troopers were sent out to deal with protesters.

Some shop windows were smashed and people looted from stores, including a Target, Saks 5th Avenue and a Footlocker, as Britt’s pub was set on fire during demonstrations.

Minneapolis Police Department chief Medaria Arradondo attempted to calm residents down by informing them that officers were not involved in the suspect’s death, and he added: “I will not allow to add more trauma to a city that’s still grieving from May 25,” in reference to Mr Floyd’s death.

Minneapolis police spokesman John Elder also confirmed that police officers did not open fire during the incident, and told reporters that at least one officer was injured during Wednesday’s demonstrations.

Police officers alongside the National Guard were deployed to deal with the crowds of people on the city’s streets, and some officers were seen macing demonstrators, according to the Mail.

The police also released footage of the suspect’s death, that showed that officers did not shoot the suspect.

One man, who had seen the footage released by the authorities, walked through the city with a megaphone and attempted to calm residents by informing them that police did not shoot the suspect.

Mr Frey, who had imposed a citywide curfew of 10pm until 6am, urged residents to go home: “What we’re calling for right now is peace. This destruction and property damage just takes away from that underlying goal.”

Mr Walz also asked crowds to go home and condemned those who were damaging shops and looting during the protests.

“Minneapolis, it’s time to heal. We must rebuild and recover. Dangerous, unlawful behaviour will not be tolerated. The State Patrol is headed to Minneapolis to help restore order,” the governor said.

He added: “I remain in close contact with the city and every state resource stands ready to help bring peace.”