News outlets in Los Angeles are demanding law enforcement drop charges and apologise for the arrest of a reporter following the shooting of two sheriff’s deputies in Compton, California.

Local media coverage captured several officers pinning Josie Huang to the ground outside a hospital where two Los Angeles sheriff’s deputies were being treated for gunshot wounds following an “ambush” in Compton on Saturday night.

Video shows five deputies holding her against the crowd while she’s handcuffed, then placing her inside a patrol car.

The Los Angeles Sheriff’s Department said in a statement on social media that Ms Huang “did not identify herself as press and later admitted she did not have proper press credentials on her person” though she was wearing press credentials around her neck.

According to Deputy Juanita Navarro of the Sheriff’s Information Bureau, Ms Huang was accused of “interfering with a lawful arrest” and held at Century Regional Detention Center before she was released without bail and cited for “obstruction”. 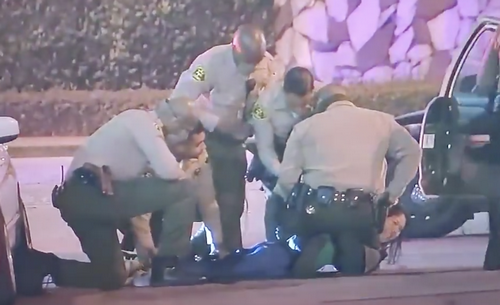 According to KPCC, Ms Huang had “visible bruises and scrapes, a sore shoulder and a blackened eye.”

LAist and KPCC have demanded that the sheriff’s office drop the charges against her: “We offer condolences to the two sheriff deputies who were shot Saturday evening. These are challenging and stressful times for everyone, but Josie Huang was arrested while doing her job.”

“Her arrest is the latest in a series of troubling interactions between our reporters and some local law enforcement officers,” the organisations’ statement continued. “Journalists provide an essential service, providing fair, accurate and timely journalism and without them, our democracy is at risk.”

In a post on Twitter, Ms Huang shared video of the scene moments before her arrest early on Sunday morning.

After her release, she wrote: “Hi, all. I’m out of county jail and am headed home. Thank you for caring. I have seen @LASDHQ tweets and have thoughts and videos to share soon after a little rest.”