On Sunday the Shchusev State Museum of Architecture in Moscow will host the premiere of a documentary film about one of the world’s foremost specialists in ancient Russian architecture, the American professor at Tulane University, William Craft Brumfield. The film, “The Treasure of William Brumfield,” was written and directed by Irma Komladze, a renowned photographer, filmmaker, designer and artist.

Brumfield, the author of many books on Russian architecture and culture, photographer, and professor, has spent almost a half century tramping through Russia’s cities, towns and hinterlands, photographing and studying ancient churches, monasteries and secular structures. Over his career he has taken more than 150,000 images that have been identified, archived and safely preserved. He is a Fellow of the Russian Academy of Fine Arts, the U.S. Library of Congress specialist for their collection of photographs by Sergei Prokudin-Gorsky and has been awarded the Order of Friendship of Peoples by the Russian Federation.

The film follows Brumfield as he photographs his “treasures” — images of Russian churches, secular buildings, towns, and cities — and as he meets with his other “treasures” — art historians, scholars, priests, writers, photographers and their families, who welcome him into the homes from Vologda to Cherepovets.

Komladze said of her film’s subject, “We made a film about a person who found his treasure in Russian culture and has given his entire life to the service of enlightenment, to propaganda (in the best sense) of Russian culture in the West.”

The 52-minute film (Russian with English subtitles) is premiering at one of Brumfield’s favorite Moscow institutions, the Museum of Architecture. The American premiere will take place during the Architecture Design Art Film Festival, to be held in Palm Springs, California on March 26-30. It will also be shown at the Master of Art Film Festival in Bulgariф, which will take place online Feb. 12-18 and then live in Sofia, Plovdiv and Varna April 8-29.  The film will then be shown on television and online platforms. 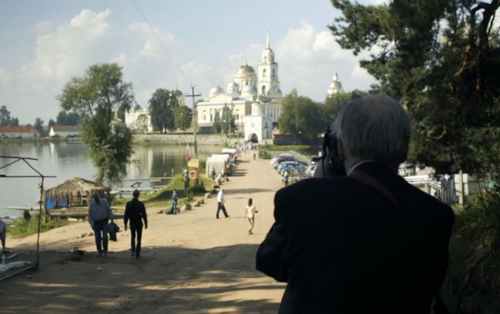 The premiere in Moscow is Feb. 14 at 7 p.m. For more information about the film and advance registration, see the site here.