US officials on Monday unveiled a fresh set of highly anticipated measures against Iran over its procurement and sale of weapons. But far from being anything new, they appeared to be the same type of economic sanctions piled on Tehran with little discernible geopolitical impact.

America aims to sanction Iranians who buy and sell weapons, and sanction other nations and entities that buy or sell weapons.

”Just imagine what Iran would do if it were able to more freely purchase advanced weapons,” US Secretary of State Mike Pompeo said at a press appearance in Washington that included several cabinet members. “We have no intention of letting that happen.”

A decade-long ban on the Iranian purchases and sales of weapons to and from Iran is set to expire next month as part of the Joint Comprehensive Plan of Action (JCPOA), the nuclear deal signed by Iran and other world powers in 2015. The US pulled out of the deal in 2018, but under an application of international jurisprudence that almost all nations and legal experts have mocked, claims it still has the power to restore or “snap back”  the arms embargo and all other sanctions lifted by the JCPOA.

But the new measures – which included even more sanctions against companies and entities and punishments against companies and countries that sell or buy weapons to the country – appeared to have little teeth. Asked directly by a journalist what the US would do if European powers continued to ignore the US position on “snap back,” Mr Pompeo demurred, instead rambling about how it was Iran and not the US that was isolated.

Asked by another reporter whether the US was increasing its defensive posture in the Middle East in response to the lifting of the arms embargo and the possible need to interdict ships moving weapons, Defense Secretary Mark Esper said no adjustments had been made.

“We continue to maintain all of the operational readiness we need,” he said. 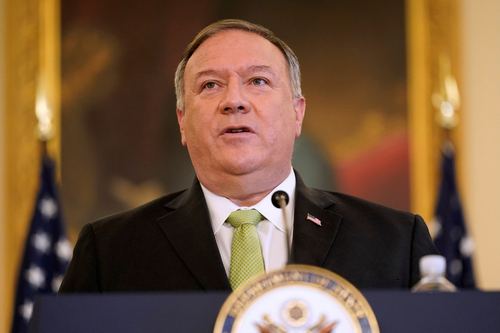 But during the press briefing and in documents released alongside it, the US cites no other tool in its arsenal of enforcement measures than more sanctions.

Additionally much of Iran’s weapons exports and imports are conducted through clandestine channels outside the US monitored banking system; Russia, the one country seemingly eager to sell Iran weapons, has explicitly stated that it will ignore Washington’s measures.

“Washington’s moves boil down to dramatic posturing for the sake of subjecting the Security Council to its maximum pressure campaign on Iran and turning this respected institution into a tool at its disposal,” the Russian foreign ministry said in a statement on Sunday.  “This did not work.”

Critics of the administration’s Iran policy have struggled to understand what the administration is trying to achieve with its policy. Even State Department and Pentagon insiders have failed to unravel the strategy, which wavers between bellicose threats and calls for negotiations with Iran, and is occasionally punctuated by dramatic kinetic action, like the assassination earlier this year of Iranian commander Qassem Suleimani.

Some have concluded that the Iran policy is mostly a communications exercise aimed at pleasing a specific clique of donors, provoking Iran and embarrassing US allies that Mr Trump has long sought to undermine.

“The Trump administration’s modus operandi is to punch its allies in the nose until they submit and embarrass them,” said one longtime consultant to foreign countries attempting to grapple with US policies. “If they don’t get what they want, fine. It’s not about nuance. They’ve made a decision that it’s not about respect.”

Iran, whose economy has been battered by harsh US sanctions since Washington withdrew from the JCPOA, has relished the spurning of the US position on the arms embargo. Of the Security Council members, only the Dominican Republic voted with the US on the snapback provision.

“The United States made an illegal and wrong request that was rejected by the majority of the UNSC members decisively,” Iran’s president Hassan Rouhani said in a speech on Sunday. “From now on, whatever the United States says will mean nothing but insurgence and no one will accept it.”