Nearly 100 environmentalists, including the prime minister’s father, are calling on banks and the International Monetary Fund to stop investing in factory farming to cut the risk of future pandemics.

In a letter to 22 leading financial institutions worldwide, the signatories, who include Jane Goodall, warn that industrial livestock production increases the potential for further disease outbreaks, and contributes to dangerous antibiotic resistance.

It was sent to banking giants including JP Morgan Chase, Standard Chartered, HSBC, Lloyds, Santander and NatWest, as well as the World Bank, the European Investment Bank and the European Bank of Reconstruction and Development. 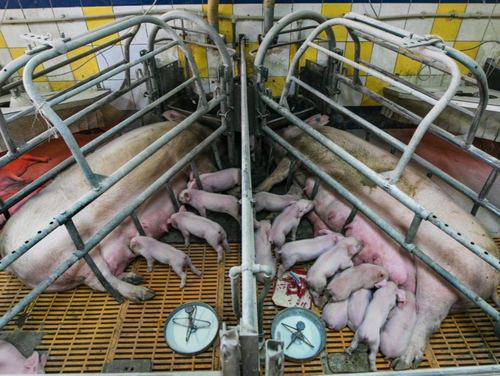 In the past five years, meat and dairy companies worldwide received at least $478bn (£370bn) in backing from more than 2,500 investment firms, banks, and pension funds, according to a report this year by Feedback, a UK group lobbying for changes to the food system.

High street banks provide billions in loans to the firms behind US chlorinated chicken, it said.

And over the past decade, the World Bank’s private investment arm has channelled more than $1.8bn into major livestock and factory farming operations around the world, according to research by Mongabay and the Bureau of Investigative Journalism.

Urging them to end their support for or funding of industrial livestock systems, the new letter says: “As the world seeks to ‘build back better’ after Covid-19, it is widely recognised that we need to rethink our relationship with the natural world and to treat it, and the creatures within it, with more respect. This will involve reshaping the way in which we feed ourselves.”

The document highlights studies showing that the crowded, stressful conditions of industrial livestock production “contribute to the emergence, spread and amplification of pathogens, some of which are zoonotic”.

Sean Gifford, of Compassion in World Farming, which coordinated the letter, said: “It’s vital that global financial institutions stop funding industrial livestock production and instead support regenerative forms of agriculture that are not only better for human health but also kinder to animals and the planet.

“We are at a turning point in history and we need major financial institutions and intergovernmental organisations to act now. The need has never been more pressing.”

The Independent has contacted UK Finance, which represents banks and the finance industry, for  a response to the letter. Explore the Wonders of ‘Red Sands’ With Caroline Eden