A 14-year-old girl is the first reported fatality in the state caused by Hurricane Laura, after a tree fell on to her family home.

Laura made landfall in the US overnight, after it had been upgraded to a Category 4 storm, with winds of up to 150mph, as it barrelled towards Louisiana and Texas coasts on Wednesday night.

Earlier on Wednesday, 1.5 million people in both Louisiana and Texas were under evacuation orders, with the National Hurricane Centre predicting an “unsurvivable storm surge” for many coastal areas of the two states.

Despite orders for coastal residents to evacuate their homes before the arrival of the hurricane, reports suggest that some people decided to stay put or were unable to leave, as the weather worsened on Wednesday afternoon and evening.

At a press conference on Thursday morning, the governor said: “Just before I came on with you, I got a report of our first fatality. A young 14-year-old girl in the Leesville area, a tree fell onto her home.”

He did not identify the girl, but added: “I suspect that won’t be the last, although I pray we don’t have any more, but we know we have at least one fatality now in Louisiana.” 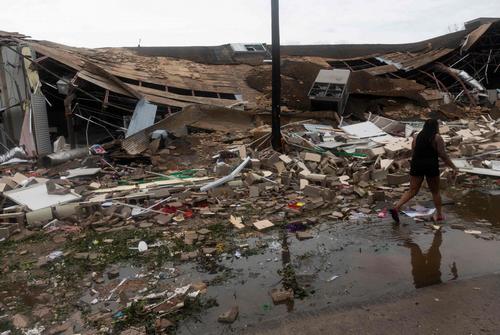 The hurricane has already caused widespread flooding and damage in both states and Louisiana governor John Bel Edwards revealed on Thursday that the state is only just beginning to assess the damage.

Mr Edwards and Texas governor Greg Abbott confirmed on Thursday morning that search and rescue teams have been deployed in the states, and said they have reports of widespread fatalities, according to the Associated Press.

Mr Abbott said the areas of Port Arthur, Beaumont and Orange were hit “pretty hard” in the state overnight, and the eye of the storm continues to move north along the Texas and Louisiana state line.

By mid-morning on Thursday, Laura had weakened, but is still classified as a hurricane as it continues to make its way inland through Texas and Louisiana with wind speeds up to 110mph.

Although he has not yet commented on the situation today, President Donald Trump tweeted about the storm on Wednesday, saying: “Hurricane Laura is a very dangerous and rapidly intensifying hurricane.

“My administration remains fully engaged with state & local emergency managers to continue preparing and assisting the great people Texas, Louisiana, and Arkansas. Listen to local officials. We are with you!”

Laura is threatening a centre of the US energy industry, and 84 per cent of Gulf oil production and an estimated 61 per cent of natural gas production has been shut down, with close to 300 platforms evacuated.

When it was still classified as a tropical storm, Laura killed at least 23 people in Haiti and the Dominican Republic, as it made its way through the Caribbean and towards the US.