“Suddenly everything collapsed,” says Mostafa, who was working at a cafe in Beirut’s bustling Gemmayzeh neighbourhood, just slightly up the hill from the site of the devastating explosion at the city’s port on 4 August.

“It’s a nightmare,” he adds. “I am still getting flashbacks of what happened.”

The cafe, badly damaged in the blast – believed to have been caused by the accidental ignition of a massive and poorly stored 2,700-tonne cargo of ammonium nitrate, used in fertilizers and mining – has now closed.

Without work, Mostafa, perhaps best known as Latiza Bombe,one of Lebanon’s most notorious drag queens, has had to move out of his apartment, comparatively untouched by the explosion, and return home to his mother. The explosion has left up to 300,000 homeless, as houses and lives were torn apart.

In returning home, Mostafa has been forced back into the closet. “She doesn’t know I’m gay,” he explains, “let alone a drag queen.” Latiza Bombe, who describes herself as “sexy yet gross” on her Instagram, is a towering perma-latex adorned figure on the Beirut scene.

The Beirut explosion, which killed at least 172 people, injured thousands and destroyed whole swathes of the city, tearing out balconies and smashing in windows, has seen fund-raising initiatives and donation sites to help repair shattered homes and rebuild independent businesses. 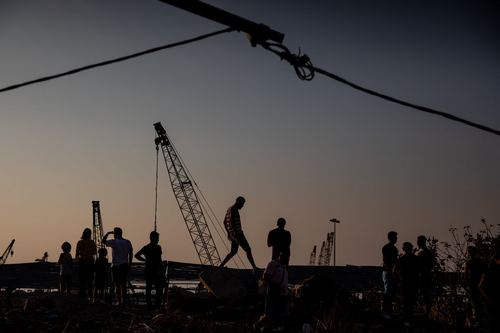 But the emergency response been unique, say those on the ground, in that a queer lens is being applied to fundraising.

Sandra Melhem and Andrea Najarian, members of the city’s LGBT+ community, have raised over $10,000 so far for the LGBT+ victims of the explosion.

“In all cases, not just when it comes to disasters, when you have an underprivileged community, you always need to shed light on it,” Sandra says. “When disaster strikes it’s needed even more. Of course light needs to be shed on all underprivileged groups, not just the LGBT+ community, but also domestic workers, and the elderly.”

Money will be used to provide food, clothes and medicine, including HIV medicine. All had already become harder to source even before the explosion, given the acute economic crisis in Lebanon – the country was already on the brink of hyperinflation, and the Lebanese pound, historically pegged to the dollar, is becoming increasingly worthless.

The LGBT+ fundraising collective is also building a database to understand precisely what impact this explosion has and might continue to have on the LGBT+ community.

While LGBT+ rights in Lebanon are largely seen as some of the most free in the Middle East, stigma endures and same-sex relations are punishable by up to a year in prison. Coming out stories can be very painful, with some people abandoned altogether by their families.

LGBT+ rights have been at the forefront of Lebanon’s “thawra” (revolution) since it began in October, with Lebanese protesters nightly calling for an overthrow of the government, seen as a hangover of the civil war, populated by corrupt men with few concerns outside of their own.

The struggles of LGBT+ people have been seen in chants, in graffiti, and in discussions that have taken place up and down the country – as the thawra become bigger than just overthrowing the government, and became a social struggle to build a more inclusive society.

This explosion, and the damage it has had on housing infrastructure has meant that many, like Mostafa, have to face going home and going back into the closet just to survive.

One of the few safe spaces for the LGBT+ community in Beirut was Madame Om a salon in Gemmayzeh. Throughout the week, crowds would flock there to see drag queens lip sync on the exquisitely tiled monochrome floor.

The community hub began life nine years ago in Hamra, to the west of the city, but Hala Habib, who owns Madame Om, moved it to a grand 19th-century mansion house in Gemmayzeh in 2016.

“Madame Om is like a friend for me,” Hala explains. “I feel as though I have a lost a friend. This beautiful space was really a space for freedom of expression in every sense of the word. People would do poetry, they sang, danced, loved, had jealous fits, got drunk, made friends.”

Hala is determined to reopen the space, although it won’t be in the same building because the damage is so severe. “I’m still in shock,” she says. “I can’t think of the future or any alternative. I know that Om will come back one way or another, but I can’t think of it now…”

Around the world fundraising campaigns for the Lebanese LGBT+ community have sprung up – with even Rupaul’s Drag Race alumna Brooke Lynn Hytes and Pearl both taking to social media to support the Beirut LGBT+ community.

One event taking place in Whitechapel, London on 22 August – Rebuilding Beirut with Pride – has been organised by a group of LGBT+ Lebanese diaspora, including Danny Nasr. who lives in the UK capital.

“Although I’ve been privileged enough to be here in the UK and live my life the way I want to, that’s not the case for so many of my friends and family back home,” he tells The Independent from London.

The event will be raising money for a number of NGOs working on the ground, and also for LGBT+ activists. “Our devastation was so much that we needed something positive to channel it into,” Nasr adds.

While public anger increases to rage at the government, for the circumstances which led to the blast, and for a lack of support in the wake of the disaster, NGOs and activists are working to fill the gaps – literally going door to door checking in on civilians, cleaning streets and repairing buildings.

And the LGBT+ community has been identified as a vulnerable group – and targeted through activism and fundraising efforts.

Dalia Mikdashi, at Oxfam Lebanon, says while there is need everywhere, the LGBT+ community must not be forgotten in the wake of the mass trauma, and must be considered specifically in the disaster response.

“We have been working with partners who focus on supporting the LGBT+ community for many years and we intend to continue to make sure they recover and thrive after this latest crisis,” Mikdashi says. “In the immediate term this means providing shelter and emergency support such as counselling.”

The explosion, says Nasr, and all the destruction it has wrought, has “exacerbated so many of these pre-existing issues that it’s made them almost impossible to ignore, and that’s why they need to be at the centre of how we want to rebuild Beirut.