Indonesian divers have found parts of a passenger plane at a depth of 75 feet under the Java Sea a day after it crashed just minutes after taking off from Jakarta.

There are fears for the lives of the missing 62 people – including 10 children – who were onboard Sriwijaya Air flight SJ182 when it departed Soekarno Hatta International Airport at 2.36pm local time on Saturday on a routine 95-minute domestic trip to Pontianak on the island of Borneo.

Data from Flightradar24 shows the 26-year-old Boeing 737-500 flew a short distance out over the Java Sea before plummeting from its highest altitude of 10,900 feet to just 250 feet above sea level within 21 seconds, at which point it disappeared from radar systems and contact with air traffic control was lost.

Local fishermen said that they heard an explosion and were hit by a high wave around the time the plane went missing.

“We heard something explode, we thought it was a bomb or a tsunami since after that we saw the big splash from the water,” 22-year-old Solihin told the Associated Press.

“It was raining heavily and the weather was so bad. So it is difficult to see around clearly. But we can see the splash and a big wave after the sounds. We were very shocked and directly saw the plane debris and the fuel around our boat.” 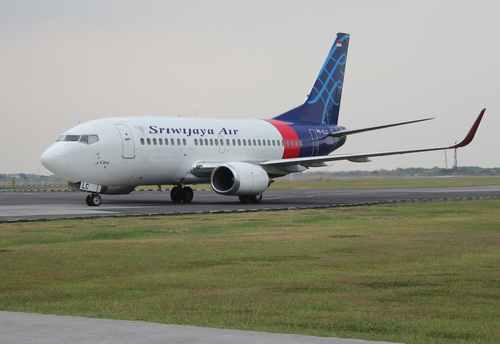 In the same location, between Lancang Island and Laki Island – some six miles north of the shore – islanders began to pull pieces of suspected debris from the surface of the water, including wires and denim.

Four warships were among a dozen vessels sent as part of the ensuing search and rescue mission, which resumed early on Sunday morning after a short pause, having carried on into the night.

“Hopefully, we can retrieve them soon,” Air Chief Marshal Hadi Tjahjanto was reported as saying by Reuters, without giving an estimated timeframe.

Once found, the two “black boxes” – the flight data recorder and cockpit voice recorder – should provide information on the control commands on the flight deck, and conversations between the captain and first officer.

“We hope that your prayers will help the search process to run well and smoothly,” said Jefferson Irwin Jauwena, the chief executive of Sriwijaya Air, who told reporters that the plane had previously flown to Pontianak and Pangkal Pinang city on the same day.

The flight’s departure was delayed by around 40 minutes because of poor weather, with storm clouds over the airport. At the time the plane took off rain was falling, with a low cloud base.

Investigators will consider a wide range of possible causes, including mechanical failure, terrorism or an encounter with a storm cell – an air mass with violent winds.

They will also look at the experience of the pilots, including the amount of flying they have done during the coronavirus pandemic, and the recent operations of the plane involved.

Reuters reported that the pilots had decades of experience between them. The flight captain was reportedly a former air force pilot, while his co-pilot is believed to have worked at Sriwijaya Air since 2013.

The search area is close to where Lion Air flight 610 came down on 29 October 2018. All 189 passengers and crew died aboard the Boeing 737 Max. It was the first of two tragedies that led to the 20-month grounding of the Max.

The latest version of the 737 re-entered service in December 2020 after comprehensive changes to a software system that, when activated by a faulty sensor, triggered both crashes.

The aircraft manufacturer tweeted: “We are aware of media reports from Jakarta regarding Sriwijaya Air flight SJ182.

“Our thoughts are with the crew, passengers, and their families. We are in contact with our airline customer and stand ready to support them during this difficult time.”

The carrier is a relatively small budget airline. It started flying in 2003 and has never suffered a fatal crash.

All Indonesian carriers were placed on the EU Air Safety List in 2007 due to “unaddressed safety concerns”. The blacklist bans or restricts operations within the European Union by airlines that are believed not to meet international safety standards.

The prohibition was not finally lifted until June 2018, four months before the Lion Air Boeing 737 Max crash.

The report into the Lion Air tragedy blamed software installed by Boeing on the latest version of the 737, which was triggered by a faulty sensor and forced the nose down despite the pilots’ efforts to save the aircraft. But it also criticised Lion Air’s maintenance team.

According to the Aviation Safety Network database, more people have died in air crashes in Indonesia than in any other country over the past decade.

As the search for flight SJ182 continued, distraught relatives waited in Pontianak for news of their loved ones. A crisis centre was also set up at the airport in Jakarta, and police asked families to provide information such as dental records and DNA samples to help identify bodies.

“We feel powerless, we can only wait and hope to get any information soon,” Irfansyah Riyanto, who had five relatives on the flight, told Reuters.