The indiscriminate killing of 14 civilians by Blackwater security guards on Baghdad’s Bloody Sunday took place at a time of fierce strife in Iraq when deaths were commonplace.

But what happened still had the power to shock, and was viewed as a grim example of how western private security companies were seemingly immune from scrutiny and prosecution for acts of extreme violence.

Donald Trump has now pardoned four guards who were found guilty in 2014 – seven years on – of the killings. One was convicted of first-degree murder and sentenced to life imprisonment, the others of voluntary and attempted manslaughter, and jailed for 30 years each.  Trump has issued a slew of pardons as he faces leaving the White House, albeit while still protesting that he has won the election.

Most of those are related to investigations that he was the Muscovian candidate for the White House, like his former national security advisor, Michael Flynn, and friend and confidant Roger Stone. The Blackwater pardons were alongside those of George Papadopoulos, a former campaign official, and Alex van der Zwaan, the son-in-law of the Russian billionaire German Khan, who had both been found guilty of lying to federal officials on Russia inquiries.

But Trump has also issued pardons for American service personnel and contractors who had killed civilians or suspects in conflict zones. Last November he pardoned a former US Army commando over the killing of a suspected Afghan bomb-maker, and a former army lieutenant convicted of murder of three Afghans after telling his men to fire on them.

Trump’s apparent empathy with these men cannot be based on shared experiences in combat zones. The outgoing president is a Vietnam draft-dodger and has described American war heroes as “losers”. Erik Prince, the founder of Blackwater, is the brother of Betsy DeVos, the education secretary, but there is no evidence that any untoward pressure was brought to bear on the Blackwater pardons. 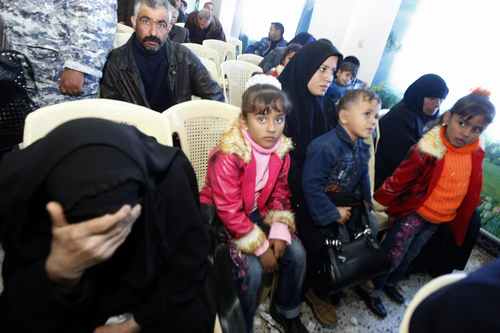 I was in Baghdad’s Nisour Square, in Mansour district, on the afternoon of 16 September with Iraqi colleagues. The killings were brutal and unprovoked. We did not see or hear the supposed ambush, which the Blackwater guards claimed had made them start shooting. Terrified men, women and children were mowed down as they tried to flee from the ferocious gunfire, cars were set on fire inflicting burns on those inside.

There was an outpouring of anger from Iraqis: but there was also the underlying feeling that this was, after all, Iraq, where atrocities were common including those involving security companies.

No one expected much to be done. The widely prevalent view was expressed by Hassan Jabar Salman, a lawyer who was shot in the back as he attempted to get away from the American convoy.

“This is not the first time they have killed innocent people, and they will do it again, you’ll see,” he said as he sat swathed in bandages at Yarmukh Hospital a day later. “Nothing, absolutely nothing, will be done.”

As if to prove his point, and those holding the same view, the government of then premier Nouri al-Maliki, which had declared that they would expel Blackwater, was forced to let the company operate again after just three days under pressure from Washington.

But the killings did not fade way. A FBI team that visited the scene of the killings a few days later described what happened as the “My Lai of Iraq”. Whether what happened at Nisour Square was the same as US forces slaughtering 500 unarmed villagers in Vietnam in a four-hour spree is open to debate. But with continuing adverse publicity, the secretary of state, Condoleezza Rice, ordered a report into the security companies.

This is not the first time they have killed innocent people, and they will do it again, you’ll see. Nothing, absolutely nothing will be done

The first scapegoat for America’s dependence on private armies appeared to be a mid-ranking official.  Richard Griffin made no mention of the Mansour killings or their aftermath in his resignation letter, but it came just one day after the report found serious lapses in the oversight of private guards. At the same time Congress moved to put under military control all armed contractors operating in combat zones – an effort the State Department strongly resisted initially.

The initial case against the four Blackwater guards – Paul Slough, Evan Liberty, Dustin Heard and Nicholas Slatten – was thrown out by a federal judge. A fresh prosecution took place in 2014 after then vice-president Joe Biden, who had expressed his “personal regret” during a visit to Baghdad in 2010, promised that justice would be served.

After the convictions, Blackwater – which changed to Academi after being sold and renamed in 2011 – said it was “relieved that the justice system has completed its investigation into a tragedy that occurred at Nisour Square in 2007 and that any wrongdoing that was carried out has been addressed by our courts”.

It added, “The security industry has evolved drastically since those events, and under the direction of new ownership and leadership, Academi has invested heavily in compliance and ethics programmes, training for our employees, and preventative measures to strictly comply with all US and local government laws.”

Lawyers for the four men welcomed news of the pardons. The American Civil Liberties Union stated the pardons were an insult to Iraqis: “Devastation in Iraq, shame and horror in the United States, and a worldwide scandal. President Trump insults the memory of the Iraqi victims and further degrades his office with this action.”