India has witnessed a dramatic drop in coronavirus cases with its health ministry claiming that the national recovery rate of 1.34 billion people is among the highest in the world at 97.31 per cent.

With 10.9 million total cases since the beginning of the pandemic and 150,000 reported deaths, India has dramatically managed a steady and steep decline in caseload in a year’s time with just 139,637 active cases and 155,732 deaths.

India reported just 12,194 new coronavirus cases in the past 24 hours and fresh fatalities are below 100 for the eighth time this month – a stark contrast to September, when India hit almost 100,000 cases a day.

The marked improvement in the second-most populated country after China came even as experts and studies predicted a spike in cases amidst crumbling healthcare infrastructure.

Experts say the situation in India has improved due to a combination of factors, but mainly because of exposure of the virus to its significant population. They, however, warn that healthcare officials need to watch out for variants of coronavirus amid laxity.

“The dynamics of these outbreaks is that they move fastest in large cities that are densely populated and have more opportunity for the people to pass the infection to each other. The outbreak moves slowly in villages,” Shahid Jameel, one of the country’s top virologists, told The Independent. 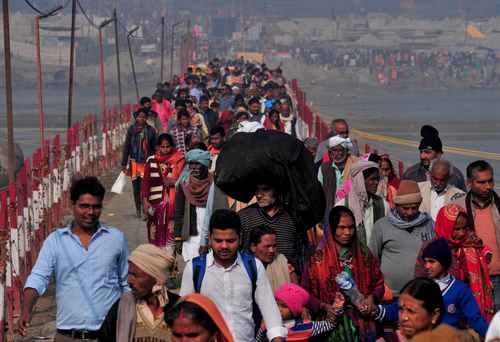 “The combination of this is resulting in the fall in daily cases simply because more number of people in the cities, where pandemic moves faster have already been exposed,” he said.

The Indian health ministry on Sunday said the country’s recovery is amongst the highest in the world at 97.31 per cent and Case Fatality Rate lowest in the world.

The active caseload consists of just 1.26 per cent of India’s infections and 86.25 per cent of the new cases are from six states.

Among other reasons, Mr Jameel said the huge demographic of young people, combined with exposure to various other infections, played in favour of the country.

According to census data, half of the nation’s population is under 25, the age group covering 600 million people. The country’s median age in 2019 was 28 while US and UK’s was at 38 and 40, respectively.

“Having more young population that is mostly asymptomatic and recovers quickly with mild infection also helped India and the third factor could simply be: living in an area where we are exposed to many other infections,” Mr Jameel said.

He explained that the innate immunity of people in India, which is a specific type of immunity, is far stronger and as a result, the infection is curtailed quickly and doesn’t really progress to severity, leading to deaths.

After facing economic woes, restaurants, bars, shops and markets have opened across India, schools have reopened partially and people have resumed work in factories.

With Covid variants posing threat to the countries around the globe, Mr Jameel warned authorities to watch out for these as they can change the dynamics of the recovery.

“It’s not necessary that the variant would be from outside. India can have homegrown variant moving quickly. We cannot afford to be complacent and have to be cautious about everything we have to do,” he said.

India released its sero survey, a study which checks antibodies in population, revealing that more than 21 per cent of the billion-plus population of India has been exposed to Covid-19, which is at least one in every five Indians over 18 years of age.

This means close to 300 million people across the country may have already been infected with Covid-19, much higher than what is reported in official data.

Dr Anant Bhan, a researcher in global health and policy, told The Independent, the sero survey by the government itself showed that more number of people were infected in the country than reported.

“The study was done by the government itself and it clearly showed more people were exposed to the virus,” Mr Bhan said. “This might not be a deliberate step, underestimation of coronavirus cases in country like India is bound to happen”.

Mr Bhan said the situation in the country was worrisome at one point of time but the life in India is almost back to normal.

“The new pattern is encouraging and will give a physiological relief to healthcare workers who have been working around the clock but this is the time we need to be more cautious as people are out on streets,” he said.

The virus seemed to retreat even as the country saw a sluggish response to an inoculation drive it kicked off on 16 January, starting off with healthcare workers.

On Saturday, a second shot of the vaccine was given to those who received the first jab on the first day of the drive. According to reports, only 4 per cent beneficiaries turned up for the second shot. The health ministry today announced that people above the age of 50 will be given the vaccine beginning from March.