Officials in Wisconsin have named the police officer who shot Jacob Blake seven times, and claimed the victim told police he had a knife in his car.

A day after lawyers for the family of the 29-year-old father of three revealed doctors said he may never walk again, officials in Kenosha said the police officer who shot Mr Blake was Rusten Sheskey, who had seven years’ experience on the force.

Officials have claimed that police were called on Sunday night to a residence after a woman caller said her boyfriend was present and that he should not have been on the premises. They said the young man was shot by Mr Sheskey as the officer held onto his shirt, and that no other officer was involved in the shooting.

Investigators also claimed Mr Blake told them he had a knife on the floor of his vehicle and that officers had tried to use a Taser on him but that it failed to stop him.

“The taser was not successful in stopping him,” said Wisconsin attorney general Josh Kaul at a press conference on Wednesday. “Mr Blake walked around his vehicle, opened the driver’s side to work and leaned forward. 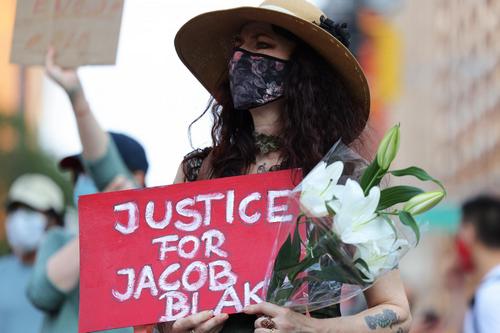 Mr Kaul said that “following the initial incident”, Mr Blake admitted that he had a knife in his possession, and that officers recovered a knife from the driver’s side floorboard of Mr Blake’s vehicle. A search of the vehicle located no additional weapons.

It was not immediately clear when Mr Blake allegedly told officers he had a weapon. There was no immediate response from Mr Blake’s family to the claims made by prosecutors.

The latest details came as the city of Kenosha, located 40 south of Milwaukee, reeled after three nights of violence and damage, that followed peaceful protests.

Donald Trump has dispatched hundreds of federal agents to the city, and the governor has deployed the state national guard, as violence failed to abate, despite the imposition of a curfew.

On Tuesday, Mr Blake’s family and legal team held their own press conference to reveal their fears that he may never walk again.

Mr Blake’s mother, Julia Jackson, said her son would “very unpleased” to learn of the damage.

“If Jacob knew what was going on he would be very unpleased. So I’m really asking and encouraging everyone in Wisconsin and abroad to take a moment and examine your heart,” Ms Jackson said.

She said when she visited her son in the hospital, he apologised when he learned he may be paralysed, saying he did not want to be “a burden”. He also requested a police officer in the room to join them in prayer.

“We need healing I also have been praying, even before this, for the healing of our country.”

Meanwhile, on Wednesday it was announced that a white teenager had been arrested after two people were shot to death during the third night of protests in Kenosha.

Kyle Rittenhouse, 17, of Antioch, Illinois, was taken into custody in Illinois on suspicion of first-degree intentional homicide. Antioch is about 15 miles from Kenosha.

Two people were killed on Tuesday night and a third was wounded in an attack apparently carried out by a young white man who was caught on cellphone video opening fire in the middle of the street with a semi-automatic rifle.

“I just killed somebody,“ the gunman could be heard saying at one point during the rampage that erupted just before midnight. 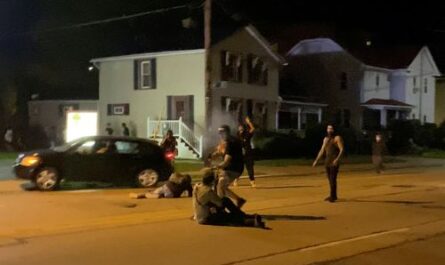