Israel’s health minister has claimed it is not the country’s job to provide the coronavirus vaccine to Palestinians living in occupied territories, despite calls from the UN to do so.

Yuli Edelstein said that while Israel had an “interest” in vaccinating Palestinians in the occupied West Bank and Gaza, it was under no “legal obligation” to provide jabs.

“As far as vaccination is concerned, I think it is Israel’s obligation first and foremost to its citizens,” he told The Andrew Marr Show on Sunday. “They pay taxes for that, don’t they?

“But having said that, I do remember that it is our interest – not our legal obligation, but our interest – to make sure Palestinians get the vaccine, that we don’t have Covid-19 spreading,” he added.

While Israel has given jabs to Palestinians living in East Jerusalem, none of the nearly 5 million Palestinians in the occupied West Bank and Gaza, where impoverished healthcare systems are under strain due to the soaring caseload during the pandemic, have been offered vaccinations.

Israel said on Friday more than 2.5 million of its 9-million-strong population had already received a jab, with the vaccination campaign now so far advanced that some teenagers have been invited to be inoculated.

The country’s officials have vehemently denied accusations of discrimination and have in the past blamed the Palestinian Authority (PA) for not seeking cooperation with the Israeli government to procure and distribute vaccines to Palestinian healthcare workers. 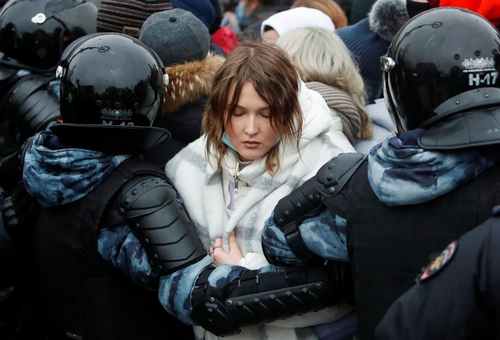 Israel’s deputy health minister, Yoav Kisch, earlier this month said the country may consider offering any vaccine surplus to the PA at a later stage.

Pushed to respond to the fact that the United Nations (UN) has said Israel has a responsibility to provide vaccines to Palestinians under the Fourth Geneva Convention, Mr Edelstein pointed to the Oslo Accords, asserting: “It says loud and clear that Palestinians have to take care of their own health.”

This is an argument that some Israeli commentators – and now, the health minister – have used to justify the differential treatment of Palestinians, with an key part of the accords determining that the PA would assume responsibility for healthcare, including vaccinations.

However, the UN has said the Oslo Accords must be interpreted and followed under international law and ultimately, the responsibility for health services “remains with the occupying power until the occupation has come to an end”.

When pressed on the UN’s assertions, Mr Edelstein continued to defend the Israeli government’s actions, adding: “If it is the responsibility of the Israeli health ministry to take care of the Palestinians, what exactly is the responsibility of the Palestinian health minister – to take care of the dolphins in the Mediterranean?”

In a statement released earlier this month, UN experts called on Israel to extend its vaccination programme to Palestinians living under occupation in the West Bank and Gaza, where an already under-resourced Palestinian health care system has been struggling under the weight of the pandemic.

“We understand that Palestinians with resident status in occupied East Jerusalem have been offered the vaccines by Israel,” the UN human rights experts said. “However, Israel has not ensured that Palestinians under occupation in the West Bank and Gaza will have any near-future access to the available vaccines.”

Noting that available information suggested that Covid-19 vaccines may not be delivered en masse to the West Bank and Gaza for many weeks, the experts said: “This means that more than 4.5 million Palestinians will remain unprotected and exposed to Covid-19, while Israeli citizens living near and among them – including the Israeli settler population – will be vaccinated.

“Morally and legally, this differential access to necessary health care in the midst of the worst global health crisis in a century is unacceptable.”

A number of other non-governmental organisations, including Human Rights Watch and Amnesty international, have also called for Israel to extend its vaccination programme to Palestinians in occupied areas.

Palestine, which is part of WHO’s Covax programme to vaccinate people in low and middle-income nations, is likely to face several more weeks of waiting before doses of any vaccine are delivered. Is Russia Cementing an Olympic Win?