The Italian premier-designate Mario Draghi on Saturday secured preliminary support from two key parties to form a new government that will decide how to spend more than €200bn (£175bn) in European Union funds to help relaunch Italy s pandemic-ravaged economy.

The populist 5-Star Movement and the right-wing League both signalled support for a Draghi-led government, saying they were ready to put aside bitter rivalries for the good of the country, increasing the potential for a broad-based government of national unity.

Mr Draghi, 73, the former president of the European Central Bank, completed a first round of talks with political parties this week. Another round is expected early next week on potential Cabinet ministers and a synthesis from Mr Draghi of his vision for the new government. He is also expected to meet with unions, business lobbies and other members of civil society.

Italy’s president tapped Mr Draghi this week to form a government after the resignation of ex-premier Giuseppe Conte, who lost support of a small but key coalition party. Before Saturday, Mr Draghi had already lined-up the support of the Democratic Party, former premier Silvio Berlusconi’s Forza Italia, former premier Matteo Renzi’s Italy Live, and the small Free and Equal party.

After their meetings with Mr Draghi, both 5-Star Movement leader Vito Crimi and League leader Matteo Salvini spoke about acting in the interest of Italy, the first western nation to be struck hard by the coronavirus. With the economic fallout of the pandemic still being tallied, both acknowledged they would have to put aside political rivalries and betrayals.

“We won’t forget the acts committed by some political forces, who are present in our memories and in our political committees,” Mr Crimi said, in what appeared to be a reference to Mr Renzi yanking Italy Alive’s support from Mr Conte’s governing coalition and triggering its collapse. 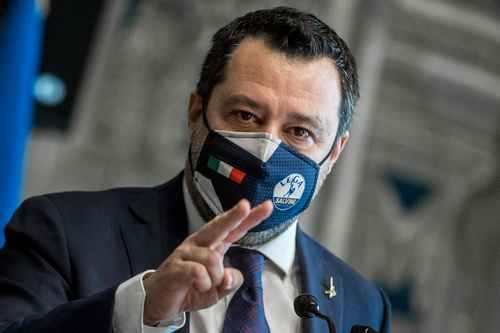 Likewise, Mr Salvini, a former interior minister in Mr Conte’s first government, noted that he would be sitting alongside politicians who voted to lift his parliamentary immunity so he could be put on trial in Sicily for not allowing migrant rescue ships to disembark in Italy when he was minister.

“We are ready to overcome everything in the interest of the country,” Mr Crimi said of the 5-Star Movement, which was the top vote-getter in the last parliamentary election in 2018 and a key element of both Conte governments, the first with the right-wing League and the second with the left-wing Democratic Party.

Mr Salvini’s move to support Mr Draghi puts him at odds with the far-right Brothers of Italy party and its leader, Giorgia Meloni. She said on Friday that she would remain in opposition. Mr Salvini cited the weight of the EU recovery funds needed to relaunch the Italian economy after a national lockdown and subsequent public health restrictions.

“I would rather be in the room where it is decided if the money is used well or not, instead of being on the outside,” he said.

Mr Crimi said that Italy would be judged by its European partners on how it spends the considerable funds, and that the 5-Stars want to guarantee the money will be distributed “with honesty, transparency and in the exclusive interest of citizens’ well-being”.

“The world is watching us and will judge if the country has changed,” Mr Crimi said.

Italian Senator Emma Bonino, who formerly was an EU commissioner, said she hoped that bringing together parties from such a broad political spectrum would not dissolve into infighting.

“What we don’t want is that this translates into yes on this, no on that, I can’t sit with him,’’ she told SKY TG24. “The priorities need to be completing the vaccination program, because without that the economy can’t be relaunched.”