New Zealand’s prime minister, Jacinda Ardern, has paid tribute to the police officer who was shot dead by a handcuffed suspect in Croydon.

Matiu Ratana, a 54-year-old sergeant, was originally from New Zealand, where he had served as a police officer after joining the force in 1991.

A friend told how Sergeant Ratana had moved to the south London custody suite, where he was killed on Friday, in order to be safer as he approached retirement.

“Incredibly sad to hear news this morning that a Metropolitan Police officer killed in the UK was Matiu Ratana, a former New Zealand Police officer,” Ms Ardern wrote on Facebook.

“Sergeant Ratana worked in Auckland City and Counties Manukau until 2008, before returning to the UK. To all Matiu’s whanau extended family across the world, we share your sorrow and have all our condolences.”

His friend Neil Donohue described him as “the nicest, most generous man you could meet”, adding that he was “just a really, genuinely nice guy”.

Speaking of Sgt Ratana’s move to custody work, he said: “He thought it was his safest option just to see him through to his retirement and no one expected this to happen – certainly not within the police cells.”

Describing his death as “devastating”, Sgt Ratana’s partner’s sister told The Sun: “He was dedicated to being a police officer and had almost 30 years of service. He knew the dangers of working in London, but for him it was all part of the job.” 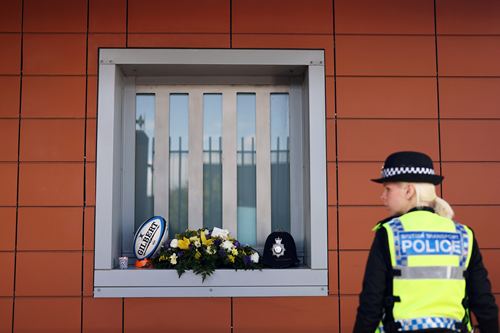 Alongside the mayor of London, Sadiq Khan, the Metropolitan Police commissioner, Dame Cressida Dick, led police officers across the capital in a minute’s silence on Friday.

Describing Sgt Ratana as a “talented police officer”, Dame Cressida said that he was “big in stature, big in heart, friendly, capable, a lovely man and highly respected by his colleagues”, and leaves behind a partner and adult son.

The 23-year-old suspect had been arrested during a stop and search for possession of class B drugs with intent to supply and possession of ammunition.

He was handcuffed behind his back, taken into the police station and sat in a holding area in the custody suite, the police watchdog said. He then opened fire while still in handcuffs as officers prepared to search him with a metal detector.

He also shot himself during the incident at about 2.15am and is in a critical but stable condition in hospital.

Investigations are continuing into how the suspect, who had been detained for possession of ammunition and possession of class B drugs, was able to access the weapon.

No police firearms were fired and the case is not being treated as terrorism-related.

While the suspect was reportedly not regarded by security services as a subject of interest, reports suggest he may have previously been referred to the anti-extremism Prevent programme.

The watchdog has obtained CCTV from the custody centre as well as body-worn video footage from the officers present, which will be reviewed in the coming days.

The sergeant is the seventeenth police officer to be fatally shot in the UK since the Second World War, and the first to be murdered with a firearm in the line of duty since PCs Fiona Bone and Nicola Hughes in September 2012.

Former Met superintendent Leroy Logan said there were questions to be answered around the circumstances that led to the shooting.

“How did that person come to be in the station, whether it’s in the yard or the building itself, and be able to produce a weapon, whether it’s on them at the time?” he said on BBC News.

“We are increasingly becoming a very difficult society to police,” he told Times Radio.

“We need to look right across the board on this, and just saying we’re going to put the sentences up will not solve that. It’s got to be about prevention and detection, and much more than just that.”