Jerry Falwell Jr, the former head of Liberty University who resigned earlier this summer after a series of scandals, appears to have suffered an injury while intoxicated shortly after news reports of an alleged sexual relationship between himself, his wife and a pool boy was published.

HuffPost obtained 911 audio and records suggesting Mr Falwell Jr suffered an injury on the night of 30 August, five days after he resigned.

His wife, Becki Falwell, called 911 because her husband was hurt and claimed there was “a lot of blood right now.”

She said Mr Falwell Jr called her around 11pm and said he’d fallen down the stairs of their church and he was bleeding. Because the doors to the church were locked, Ms Falwell had to break in using a chair. She called 911 around 2:30am.

The dispatcher tried to push Ms Falwell, explaining that excessive alcohol use can thin blood and account for excess bleeding, but she continued to resist giving further information.

“The more I tell you the name, the more you’re going to understand why we’re not talking to you right now,” Ms Falwell said. 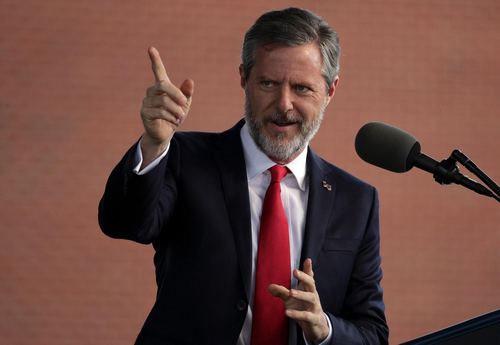 Dispatch logs, obtained by HuffPost, said that “He won’t let her take him to the hospital as he is stubborn. Caller was not forthcoming.”

Medics arrived at the couple’s home later in the night. A first responder noted that Mr Falwell Jr had cuts on his face, including under his left eye, across the bridge of his nose, and above both of his eyes.

According to first responder reports, Mr Falwell Jr said he hit his head on a trash can. The report indicated that there was “blood in the area he indicated” as well as “empty alcohol containers.” The report also said that Mr Falwell Jr’s “had slurred and slowed speech and would repeat things already asked.”

Mr Falwell Jr resigned after a Reuters report detailed a sexual relationship he, his wife and Giancarlo Granda, a Miami man who knows the couple, had over the course of several years.

In the report, Mr Granda claimed that the Falwells lived a “lavish lifestyle,” that “consisted of heavy drinking and going to nightclubs, which is strictly prohibited by the honor code that they expect everyone else to follow.”

Liberty University, where Mr Falwell Jr served as president, has strict rules against sexual relationships between students and strict guidelines against alcohol use.

A Wall Street Journal report spoke with former Liberty administrators, staff and donors that he “showed up to campus appearing drunk or smelling of alcohol.”

Mr Falwell Jr denied the allegations but said alcohol was not banned for faculty.

Shortly before his resignation, Mr Falwell Jr posted a photo that showed him standing with his arm around a woman who was not his wife with his pants unzipped while he held a glass with a dark liquid.

On 31 Aug, Liberty University’s board of trustees announced it would launch a comprehensive investigation by an outside firm of Mr Falwell Jr’s time as president.

Mr Falwell Jr claimed the glass contained “black water” and was a “prop” as part of a Trailer Park Boys costume.