As the Ukrainian authorities announced sanctions against pro-Russian politicians and media, Moscow responded with harsh criticism and state propagandists called on the government to annex the Donbass separatist republics.

In the space of just a few days, Russia and Ukraine have escalated their sleepy stalemate in Donbass to the brink of a new war.

The acrimonious exchange immediately resulted in new peaks in the number of ceasefire violations between the Ukrainian army and separatists, fueling fears that Europe’s most volatile conflict may again spiral out of control.

Ukrainian President Volodymyr Zelensky’s actions are in sharp contrast with the peacemaker image that he cultivated in the early months of his presidency. On Feb. 2, he closed down three pro-Russian TV channels, accusing their owner of financing Donbass separatists.

This was followed on Feb. 19 by a barrage of sanctions against a number of Ukrainian and Russian individuals and companies on the same charges.

The most notorious name on the sanctions list was Viktor Medvedchuk. A veteran of Ukrainian politics, he heads the Opposition Platform–For Life, the country’s leading pro-Russian party. Medvedchuk is also widely believed to be a close friend of Russian President Vladimir Putin, and his right-hand man in Ukraine for the past two decades.

Russia’s response to the Ukrainian sanctions was sharply worded but less emotional than might have been expected. Accusing Kiev of double standards and political repression, the Kremlin pledged not to let Donbass down. 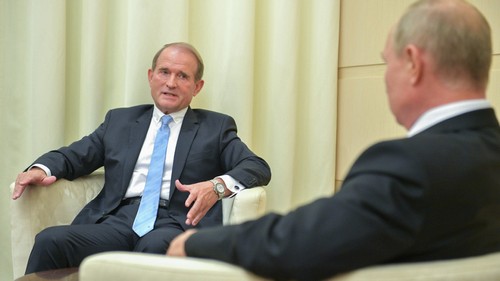 Yet the overall tone of Russian officials’ statements was relatively dispassionate, as if Ukraine’s actions were of no surprise to them.

Indeed, the Kremlin attaches little significance to the domestic dynamics behind Zelensky’s decisions.

It pays no attention to the Ukrainian president’s falling approval ratings or his desire to appear as a strong leader. The Russian leadership holds not Kiev but the new U.S. administration responsible for the rising tensions in Russia-Ukraine relations.

Ever since the U.S. presidential campaign, the Kremlin has taken seriously Biden’s promises to be tougher on Russia, and has braced itself for Washington redoubling its efforts to contain Russian influence.

In this context, the current flare-up in Ukraine is just another element in what Moscow sees as a new anti-Russian offensive by the United States: a predictable follow-up to American support for the jailed Russian opposition leader Alexei Navalny and a new crisis in Russia-Europe relations.

With Washington simultaneously demanding the release of Navalny and backing Zelensky’s crackdown on Ukraine’s pro-Russian opposition, Moscow’s interpretation is that this is ultimate proof that the West’s rhetoric on democracy and human rights is no more than an instrument of geopolitical rivalry.

The other conclusion drawn by the Kremlin is that it should further intensify its efforts to decrease the country’s dependency on the West, as new sanctions may hit at any point.

As for Ukraine, the current crisis irreversibly disqualifies Zelensky as a potential interlocutor for the Kremlin. Earlier in his presidency, the Russian leadership made some overtures to the new Ukrainian leader. It helped impose an effective ceasefire in Donbass and negotiated a new long-term gas contract with Ukraine. Now even that cautious rapprochement is finished, with the Kremlin writing off Zelensky as a mere enabler of the U.S. agenda.

The sanctioning of Medvedchuk makes the resumption of substantive talks between Russia and Ukraine all but impossible. In recent years, he was the only Ukrainian politician to regularly meet with Putin in person: in an attempt to boost Medvedchuk’s popularity in Ukraine, Moscow made him the key mediator in its contacts with Kiev.

Russia portrayed him as an indispensable fixer who helped Ukraine secure a relatively favorable gas deal, organize prisoner exchanges with the separatist republics, and exempt Ukrainian companies from Russian sanctions.

The new sanctions preclude Medvedchuk from carrying on in this role, but that doesn’t mean that the Kremlin will seek a replacement. Rather, it will double down on assistance to the disgraced politician, helping him to restore his financial standing, which has been severely damaged by the sanctions. Medvedchuk’s party is already ranking first in Ukrainian opinion polls, and its popularity is likely to get a further boost as moderate pro-Russian voters in Ukraine become increasingly disenchanted with Zelensky’s tilt toward nationalist policies.

In Donbass, the crisis has already resulted in a sharp rise in the number of ceasefire violations. After a six-month lull, the situation on the line of contact has returned to the status quo ante, with regular fatal exchanges of gunfire and shelling. Implementing the arrangements negotiated at the latest Normandy summit is out of the question, and military commanders on both sides of the front have affirmed their readiness to stand their ground.

The Minsk peace process aimed at ending the Donbass conflict is most probably dead, having been in tatters long before the current crisis. The Ukrainian leadership openly acknowledged its inability to implement the agreement in full months ago, while Russia has no desire to meet Ukraine halfway and renegotiate the terms of the settlement.

However, even this grim reality does not necessarily mean the imminent renewal of a full-scale war in Donbass.

The Kremlin has never believed that Ukraine has much agency in the conflict, and deems the current escalation to have been instigated by the new team in Washington.

It also holds France and Germany partly responsible for failing to rein in Ukraine, thus reneging on their obligations as the co-sponsors of the Minsk Agreement.

Moscow’s harsh statements on its readiness to protect the separatist republics are not so much a threat to take revenge for the Ukrainian sanctions as an attempt to deter Kiev from trying to solve the Donbass conflict by force.

For Russia, renewal of the war — let alone the annexation of the self-proclaimed republics — would be a costly undertaking with unclear benefits. It is bound to be highly unpopular with Russian society, which is fatigued by foreign policy adventurism, and further complicate Russia’s relations with European countries.

A more likely course of action from Moscow is to gradually entrench the status quo, assuming greater responsibility for the residents of the separatist entities.

It has already issued more than 200,000 Russian passports to people there, including over 20,000 so far this year.

It has also provided local hospitals with free coronavirus vaccines. In addition, Moscow is increasingly open about being ready to offer military support to the self-proclaimed republics. The Donbass settlement has been lurching toward failure for some time now, and another stumbling block on its way will hardly cause major change in Russia’s calculus. 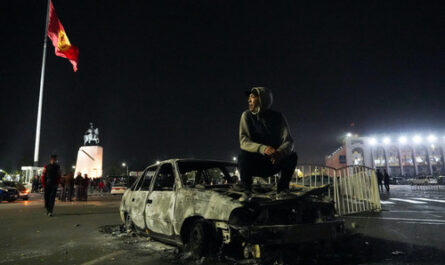