Russian opposition leader Alexei Navalny is in a coma in a Siberian hospital after being poisoned by a toxic substance in his tea, his spokeswoman said Thursday.

A hospital representative in the Siberian city of Omsk told journalists that the Kremlin critic is connected to a ventilator and in critical condition. The representative said that all necessary tests were being taken.

“We suspect Alexei was poisoned with something mixed into his tea. It was the only thing he drank all morning,” Navalny’s spokeswoman Kira Yarmish wrote on Twitter Thursday morning. “Doctors said that the toxin was absorbed more quickly through hot liquid.”

The state-run TASS news agency cited a law enforcement official as saying that so far investigators are not considering that Navalny was poisoned intentionally.

Navalny fell ill during a flight from the Siberian city of Tomsk to Moscow. A photo surfaced Thursday morning of Navalny drinking a cup of tea in an airport cafe, before another video circling on social media showed him being stretchered off the plane in obvious pain when it made an emergency landing in Omsk.

The manager of the cafe told the Interfax news agency that he would be launching an investigation.

Navalny’s personal doctor Anastasiya Vasiliyeva wrote on Twitter that the hospital was refusing to communicate with her, but that Navalny’s pupils were showing reactions. She said she was on her way to Omsk.

The doctor overseeing Navalny’s treatment told reporters that medics were doing everything to save his life.

Navalny was returning to the Russian capital after touring Siberia in support of independent candidates running in local elections next month. On Wednesday, he posted a photo on Instagram from the city of Tomsk with the caption: “Crooks wont kick themselves out of the city parliament!”

Here’s Navalny drinking the tea in the Tomsk airport. The same person also published a video of Navalny screaming in pain in the toilet, which I won’t link to pic.twitter.com/OaDeZTqesj

A longtime critic of the Kremlin and Russia’s de facto opposition leader, Navalny has faced pressure for his activism before.

While serving a 30-day prison sentence last summer for calling on people to attend an anti-government protest, Navalny faced an acute allergic reaction. At least one doctor said he may have been poisoned.

In 2017, a pro-Kremlin activist threw a chemical dye at him that left him partially blind in one eye.

That year Navalny had triggered some of the largest anti-government protests in years after his Anti-Corruption Foundation published an investigation into corruption by then Prime Minister Dmitry Medvedev. On Thursday, the local Taiga.info news website reported that Navalny may have been in Tomsk to work on an investigation into local deputies representing the ruling United Russia party.

In 2006, former Russian spy turned critic of President Vladimir Putin Alexander Litvinenko was poisoned by tea laced with a radioactive isotope while in exile in the U.K.

That same year, Pussy Riot activist and publisher of the online investigative news site Mediazona Pyotr Verzilov was rushed to a Moscow hospital after suddenly losing his sight, hearing and mobility. After three days he was airlifted to Germany, where doctors at a hospital in Berlin said his symptoms were strongly indicative of poisoning. 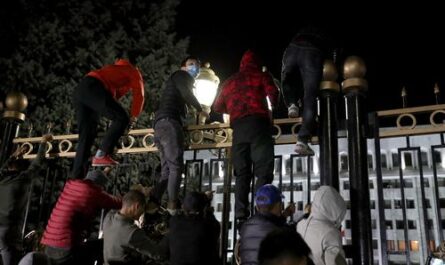