A recent memo released by a Los Angeles healthcare leader has caused concern about the care cardiac arrest patients could receive given the recent surge of Covid-19 hospitalisations.

Dr Marianne Gausche-Hill, the medical director of LA County’s Emergency Medical Services agency, sent out a memo on 28 December about how first responders should respond to stroke and heart attack patients.

Patients should be treated at the scene first and “shall not be transported if return of spontaneous circulation (ROSC) is not achieved on the field,” the memo read.

This change in procedure would be “effective immediately” due to “the severe impact of the Covid-19 pandemic on EMS and 9-1-1 Receiving Hospitals”. It would apply to all adults ages 18 years and older.

Prior to the coronavirus pandemic, even those who had slim odds of living would be transported to the hospital by first responders because capacity could accommodate those patients.

But now patients who are not transported to hospital systems could include those whose hearts have stopped and are showing no signs of recovery – such as a pulse, movement, or breathing – following resuscitation efforts on the scene.

Currently 7,544 people are hospitalised in LA County with Covid-19 as of Monday, according to the county’s daily tally. This number has been on the rise for weeks, and experts expressed concern the healthcare system could be further exacerbated with the anticipated surge following the holiday season. 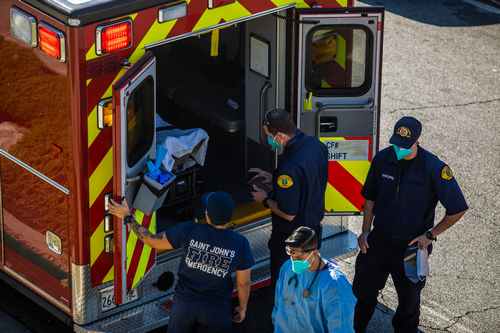 “We are exploring collectively every possible way to reduce the burden on the hospitals,” he said. “There’s a lot of actions that have been taken to improve the coordination of identifying patients really needing hospitalisation and linking them up to where there’s an available bed rather than stacking up ambulances outside an emergency department.”

Dr Gausche-Hill’s memo sparked concern among the public about the care one might receive if they were to suffer a heart attack or stroke, but she said first responders were not “abandoning” resuscitation efforts of patients.

“We are not abandoning resuscitation,” Dr Gausche-Hill told CBS Los Angeles. “We are absolutely doing best practice resuscitation and that is do it in the field, do it right away. What we’re asking is that — which is slightly different than before — is that we are emphasising the fact that transporting these patients arrested leads to very poor outcomes. We knew that already and we just don’t want to impact our hospitals.”

Many hospitals in the area are reporting most of their ICU beds are full, which has influenced stricter lockdown measures in LA County and other parts of California.

Governor Gavin Newsom warned the state could see a “surge on top of a surge” in the coming weeks following holiday travel and gatherings.