A weak and relatively untested group of political leaders are set to take the helm of Libya and attempt what far more powerful leaders have failed to do for 10 years: unite the country’s fractured polity and security forces, usher out myriad foreign military elements, and ameliorate the suffering of the North African nation’s four million people.

Interim prime minister-elect Abdulhamid al-Dbeibah vowed to form a technocratic government that would oversee the country’s affairs until elections at the end of 2021.

“There will be a fair representation of all segments of the Libyan people and all regions, but the focus will be on technocrat goals,” he told Turkey’s Anadolu news agency in an interview on Sunday. “We will work to bring different perspectives closer to each other in order to hold the elections without violence, war, or resentment between cities.”

Oil-rich Libya has been in a state of chaos since Nato-backed rebels toppled the government of Muammer Gaddafi nearly a decade ago, eventually tearing the country asunder into two rival governments in the east and west. It has also become the site of a proxy war pitting Turkey and Qatar against the United Arab Emirates, Egypt, and Russia.

But international officials have been pushing to end the war and stitch the country back together. The ongoing turmoil in Libya enters a fresh stage following the naming of both an interim government and the ascension of a new United Nations troubleshooter.

On Monday, UN envoy special envoy Jan Kubis, a former Slovakian foreign minister and UN representative to Lebanon, took the helm as the diplomatic point-person Libya. He takes over from the American diplomat Stephanie Williams, who has been serving as acting UN envoy for a year. 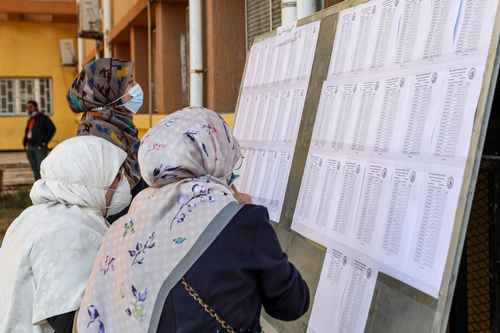 A UN-assembled council of Libyan dignitaries gathered near Geneva on Friday named Mr Dbeibah as well as a three-person presidential council to oversee the country ahead of elections scheduled for 24 December.

The outcome of the Geneva selection process for the interim government was a surprise, and a loss for the country’s entrenched political elite.

Both Mr Bashaga and Mr Saleh have emerged as political giants of Libya’s post-Gaddafi order, each cultivating ties to foreign backers and domestic armed groups.

“Wow,” Claudia Gazzini, Libya researcher at the Crisis Group, the conflict resolution and advocacy group, said after the vote results were announced. “That was a surprise.”

“We must give the new government an opportunity and see if it can take the path we want,” speaker of Libya’s east-based parliament, Aguila Saleh, said Sunday night. He lost out in the first-round of voting. “If it deviates, we will take a stand on it.”

Others, including eastern warlord Khalifa Haftar were silent.

“My concern is that although this line up has the endorsement of the UN backed forumt they face a great number of spoilers,” said Mr Gazzini “It’s unclear whether forces close to Bashaga will accept this. It’s unclear how Haftar will react.”

Many things can easily go wrong before 24 December. First off, Mr Dbeibah must present a Cabinet and get it approved by the eastern parliament, called the Council of Representatives, within three weeks.

If Mr Haftar, or any of Libya’s foreign stakeholders want, they can likely manipulate members into rejecting Mr Dbeiibah’s proposed slate. “They all had their yes-men on the Bashaga list and they were counting on that list winning,” said Ms Gazzini.

Mr Menfi, head of the interim presidential council, is a member of a prominent Libyan tribe but may also raise the ire of Mr Haftar because some consider him close to the Muslim Brotherhood.

Libya has pressing concerns, and the public is seething with anger at the political class. Corruption is rampant, and there are allegations that political leaders and their oligarchic allies have made off with billions of dollars in public funds and assets since 2011.

The country’s capital, Tripoli, continues to suffer extensive destruction from a war between Mr Haftar and the UN-recognised government that only came to an end last year.

“The damage may not be as expensive in terms of the depth it’s widespread in so many areas,” said Fadel Lameen, head of a Libyan think tank and among the contenders for interim prime minister in last week’s vote.

“There’s no programme for reconstruction or supporting those who had homes and businesses destroyed,” he said. “There are some people who are on their own, and sold their cars or sold their jewelry or whatever they had, and used it to repair their own houses.”

Mr Dbeibah has mentioned increasing coronavirus vaccinations and ending power outages as among his priorities over the next 10 months. But many worry that the country’s political elite is too disconnected from the troubles of ordinary people to make changes.

“They live in bubbles,” said Mr Lameen. “If you want to fly you have your private jet. If you have medical issues you just have to fly to Turkey or the UK. They wouldn’t care about the quality of schools. Their kids are staying in Cairo, or Istanbul. With the exception of a few they are there to access power in order to access funds.”