A team of climbers have made history by becoming the first to scale Pakistan’s K2 summit – the world’s second tallest peak – during winter.

The 10 Nepalese sherpas, among them Nirmal Purja, a former Gurkha and UK special forces member who had previously climbed all 14 of the world’s 8,000-metre peaks in just over six months, successfully completed the attempt just before 5pm local time on Saturday.

They had paused 70 metres short of the 8,611-metre peak to wait for one another and cross the threshold together. Once at the top they sung Nepal’s national anthem before descending.

K2, located on the Pakistan-China border, is the most prominent on the Pakistani side of the Himalayan range and had been the only mountain higher than 8,000 metres not to have been summited in the winter.

This is largely due to the fact winter winds on the infamous peak can blow at more than 125 miles per hour and temperatures drop to -60C. The 10 Nepalis were lucky with weather conditions, having left their high camp at 1am for a summit attempt via the Abruzzi Spur in temperatures as cold as -40C but with low wind and in brilliant sunshine, according to reports. 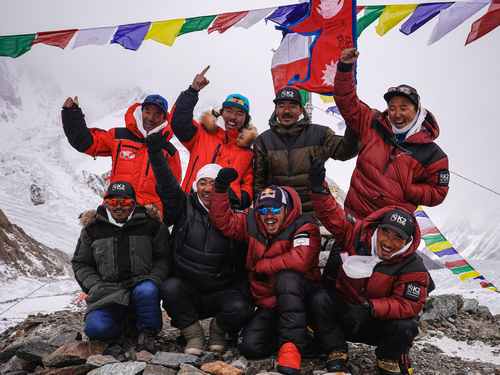 In a statement, Mr Purja described the achievement as “a journey”, saying he was “humbled to say that as a team, we have summited the magnificent K2 in extreme winter conditions”.

“We set out to make the impossible possible and we are honoured to be sharing this moment, not only with the Nepalese climbing community but with communities all across the world,” he said.

“Mother nature always has bigger things to say and standing on the summit, witness to the sheer force of her extremities, we are proud to have been a part of history for humankind and to show that collaboration, teamwork and a positive mental attitude can push limits to what we feel might be possible.”

Karrar Haidri, secretary of Pakistan’s Alpine Club, said on Saturday that four international climbing teams had arrived at the end of last year to try scaling K2. Of these roughly 48 people, the group of 10 Nepalis were so far the only successful team, he told Reuters.

However, the team’s celebrations were overshadowed by the death on K2 of renowned Spanish climber Sergio Mingote, who, according to Mr Haidri, fell down a crevasse on the mountain as he attempted to make his way to Base Camp.

“Dismayed by the news of the accident that has ended the life of a magnificent athlete,” Spain’s minister of health Salvador Illa wrote on Twitter, adding Mingote was “a personal friend”.

K2 was first climbed in 1954 by Achille Compagnoni and Lino Lacedelli, and quickly became notorious for its sleep slopes and high winds. There had been six previous winter attempts on the mountain – when its surface turns to “slick ice” – but none were successful.

The Pakistani military is regularly called in to rescue K2 climbers using helicopters. According to official figures, of the 367 people to have completed its ascent by 2018, 86 died.

People around the world have excitedly reacted to the news of the Nepali team’s feat. One well-known climber and photographer, Steve Razzetti, tweeted his “respect” for the group.

“Mountaineering history is being made as I post this,” he wrote minutes before the group officially achieved the all-time first.