Federal authorities in the US are recommending a hold on the use of the single-shot Johnson & Johnson vaccine, which has already been administered to some 7 million Americans. The move comes after six serious cases of blood clots among women who had received the vaccine; all were between 16 and 48. One of the women later died from her condition.

The US has already delivered around 16 million doses of the shot to states around the country as part of its vaccination programme, which has been steaming ahead in recent months after a slow and disorganised start. Around 120m Americans have received at least one dose of a vaccine, with nearly 185 million individual doses administered so far.

The announcement only affects federal vaccination sites, but it is expected that the authorities will urge state vaccination programmes to follow their lead.

The Food and Drug Administration has announced an audio press conference at 10am ET. Until then, you can follow the latest developments here.

New York has become the first state to follow the federal agencies’ lead and suspend the use of the Johnson & Johnson vaccine while the handful of blood clot incidents are investigated, says the state health commissioner.

All those with vaccine appointments today who were due to receive the Johnson & Johnson shot will be given the Pfizer vaccine instead. 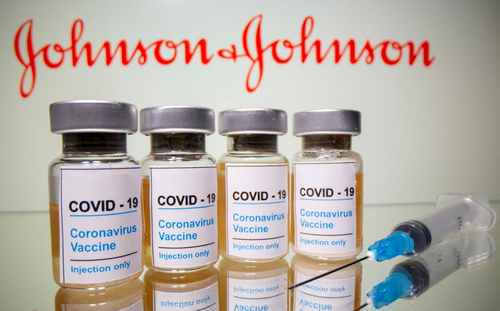 Dr Fauci: US may not need AstraZeneca vaccine

Speaking to the BBC this morning before the FDA’s announcement, Dr Anthony Fauci said that the US’s supply of vaccines from various companies is strong enough that it may never need to use the AstraZeneca vaccine.

“Whether or not we ever use AZ is unclear,” he said, “but it looks right now at this point in time that we will not need it. It’s not a negative indictment of AZ, it is just possible that given the supply that we have from other companies that we may not need to use an AZ vaccine.”

The AstraZeneca shot, which is not yet approved in the US, has been the subject of concern from European regulators and governments, who have restricted its use in certain age groups after blood clots in some recipients.

As with the new Johnson & Johnson concerns, the events occurred in an extremely small proportion of people receiving the shot.

The news that the Johnson & Johnson vaccine is being investigated in relation to blood clots seems to have affected the markets, with the Dow Jones falling more than 120 points after the announcement.

It has not been explained what specific form the adverse reactions took. Other similar incidents involving small numbers of people have been reported in other states.

Explaining that they are “recommending a pause in the use of this vaccine out of an abundance of caution”, the FDA wrote in a statement that the incidents causing concern involve a particular variety of blood clot that unlike more typical varieties demands “unique treatment”.

The pause on the vaccine was announced this morning, with the FDA and CDC announcing that scientists will investigate the cause of the clots (a condition known as cerebral venous thrombosis) while the vaccine is suspended.

Here’s our news story explaining what we know so far.