The anguished end of Cemil Tascioglu’s well-lived life came on 1 April. He was a physician who had devoted his life to treating both the patients under his care and the medical students under his tutelage with dignity and compassion. But the respected doctor and beloved scholar died hooked up to machines and alone in an intensive care unit, becoming one of the nearly one million people worldwide killed by the coronavirus pandemic.

He spent his last two weeks intubated and unconscious in the same Istanbul teaching hospital where he had worked much of his life. When the doctor and professor of medicine finally succumbed to Covid-19, no warm hands of his children or loved ones held onto his. None of the students or colleagues that he had trained, nurtured and cultivated over the decades were nearby. He was 68.

“The saddest part was that you could not physically contact him or say anything to him in those final days,” says his son, Irem Tascioglu, 35. “The whole process was a bit too quick. We were talking on the phone and he sounded healthy. Then he got intubated and we were really worried.  They don’t let you into his room. You couldn’t even get near. You could not even go inside the hospital.”

Tascioglu, who contracted coronavirus after treating Turkey’s first confirmed Covid-19 case, was one of thousands and perhaps tens of thousands physicians, nurses and medical personnel to have succumbed to the disease they are on the frontline of  treating.

Of the nearly one million who have died of Covid-19, thousands have been medical workers. The World Health Organisation estimates that 14 per cent of all those infected have been hospital or clinic employees and staff, including ambulance drivers and orderlies, putting a disproportionate burden of the pandemic onto the shoulders of healthcare employees. 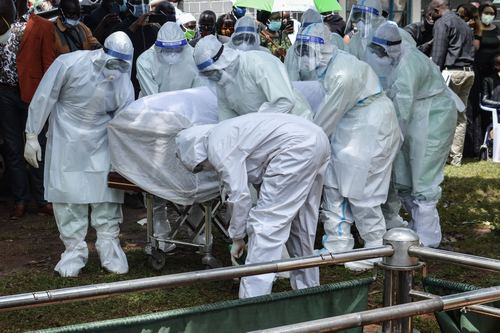 Amnesty International reported earlier this month that at least 7,000 healthcare workers have died of Covid-19, though the numbers could be much higher. The International Council of Nurses reported this month said at least 1,000 nurses have died  in 44 countries surveyed. Some estimates put the number of medical personnel deaths at 30,000 worldwide.

“These are huge numbers, and behind every of those numbers is the tragedy and loss for an individual family,” says Howard Catton, CEO of the Geneva-based International Council of Nurses. “The fact that countries are not systematically collected data on this is a scandal.”

The journal Medscape has a database naming 1,800 medical workers who have died of the pandemic. Among them are Felicia Ailende, 67, a nurse at a nursing home in southwestern Chicago; Wang Tucheng, a 27-year-old village doctor in China’s Henan province; Gerallt Davies, a 51-year-old paramedic in Swansea; Mohammad Javed, a 55-year-old ear, nose and throat specialist in Peshawar, Pakistan; and Carla de Oliveira Obelar, a 42-year-old neonatal nurse in Rio de Janeiro.

As the pandemic’s toll looks set to surpass one million, it has transformed the medical profession like no other, affecting recruitment and retirement patterns, as well as day-to-day protocols, adding a new and enduring layer of fear and stress to the lives of caregivers.

“Covid has probably changed forever many things in our societies but certainly has changed the delivery of health services,” says Dr Edward Kelley, a senior official at the World Health Organisation, responding to a question from The Independent. “Not just infections, but the stress and the mental health and the new ways of working have forced the medical community to adjust to Covid.”

The human loss is unfathomable. In addition to the grief of those close to the fallen, the wave of premature doctor and nurse deaths means hundreds of years of precious experience and expensive training are lost.

Tascioglu, for example, was never referred to by his students or even most colleagues as “doctor.” He was called hocam, which means my coach or mentor, in Turkish, or hakim, which suggests a wise man or judge.

“How he was actually treating patients not like carriers of disease or illness,” says his son, Irem. “He was always asking questions about their life stories. He was well known for his diagnostic skills. All the students were impressed by the way he talked. ‘What do you think is wrong with this patient?’ he would ask . ‘But don’t be too technical. Try not to impose. Try to learn. Try to ask.’”

The threat of death and illness is profoundly impacting the mental health of those medical personnel who soldier on. Many fear contracting the virus at work and bringing it home to more vulnerable relatives, or their own children.

In much of the world being a doctor or nurse in  itself never really posed a challenge to ones health, says Andrew Goddard, a professor of medicine at Royal Darby Hospital and president of the Royal College of Physicians. “This is the first time that doctors are fearing for their lives and health, but also for the health of their families.”

Goddard, a gastroenterologist, described the Covid-19 death of a close friend and colleague “as probably the worst point of my professional life.”

Numerous studies have already been sketched out warning that the pandemic was wearing out the medical community, causing an epidemic of Burnout Syndrome, “defined as an excessive and prolonged stress whose main components are emotional fatigue causing energy loss, wear out feeling and fatigue,” which lead to diminished working ability and depression, according to a paper by published a Brazilian medical journal.

“There is a huge hidden mental health risk to our nursing workforce submerged below the surface of the pandemic,” says Catton, of the International Council of Nurses, which authored a study on the impact of the pandemic. “The real scale of the mental health legacy of Covid-19 will undoubtedly mean that sickness, absenteeism, burnout and nurses leaving the profession because of ill health will increase.”

Faced with the dangers and stress of the pandemic era, many physicians and nurses have taken early retirements, or simply quit their jobs. In Turkey, between 200 and 300 hundred physicians have either applied to retire or stopped showing up for work, said the head of the doctors association. Tascioglu was set to retire from clinical practice this year, though he was eager to keep teaching.

The shortfall in experienced and well-trained medical personnel will be global. Jordan Search Consultants, an American recruitment firm, predicts an “unprecedented demand for providers unlike what hospitals have ever dealt with before” as a result of Covid-19.

“People are asking, am I prepared to take that level of personal risk and sacrifice?” says Catton.

The pandemic has also complicated efforts to quickly train up new physicians. Remote learning means medical students are unable to shadow physicians or work as volunteers at medical facilities and are denied access to laboratories or morgues.

“We’ve seen a dramatic decrease in our ability to train doctors,” says Omar Khorshid, president of the Australian Medical Association, speaking in a telephone interview from Perth. “We’ve been unable to perform exams. We’ve had difficulty performing the selection processes.”

Coronavirus travel restrictions have also hindered the ability to hire medical workers from abroad, adding to the woes of hospitals, clinics and elder care facilities. “We’re dependent on medical practitioners coming from overseas, so the supply of medical personnel has exacerbated the problems in our healthcare system,” says Khorshid.

As with other aspects of the pandemic, nations’ ability to protect medical workers and give them necessary support has varied greatly. In Australia, for example, not a single medical worker has died of Covid-19, though more than 2,000 have been infected. Canada has recorded only 12 deaths of healthcare workers because of Covid.

Meanwhile more than 649 such deaths have been reported in the UK. 631 in Russia and 634 in Brazil.

According to the tabulation by Amnesty International, at least 1,320 medical personnel deaths were reported in Mexico alone, and nearly 1,100 in the US.

Egypt and Iran have reported about 160 deaths of medical personnel, but the numbers could be much higher amid lingering doubts about the accuracy of official statistics within authoritarian states.

Details on who is dying and how are sparse. According to an analysis of Medscape’s database, more than half the dead are physicians, with an average age of 62 and mostly male. More than a quarter of the doctors who died were primary care or family practice physicians, as opposed to emergency room doctors and anesthesiologists in charge of intubations — suggesting those in the most acute treatment  were taking extraordinary precautions that were shielding them from the coronavirus.

As a new wave of the virus appeared to be picking up globally, healthcare advocates have called on governments to do more to protect frontline healthcare workers facing a high likelihood of infection and possible death as well as misery as a result of the pandemic.

“The fight against the pandemic is being waged by doctors.” says Sinan Adıyaman, head of the board of the main doctors association in Turkey, where he said at least 100 healthcare workers have died of the pandemic. “If there was success against coronavirus it was a success by individual doctors and their hard work and not the government.”

Many governments pay lip service to the sacrifices of healthcare workers. Turkey, for example, named a new Istanbul hospital after Tascioglu following his death.  A giant in Turkey’s medical profession, his early April funeral was a sparse and solemn affair, with no public announcement and only a few relatives wearing masks and awkwardly maintaining their social distance from each other allowed to attend the ceremony. As with many who’ve suffered a loss during the pandemic, the many who mourned him were forced to do so mostly in private at the urging of authorities worldwide who have sought to ban or limit large funeral services.

The fight against the pandemic is being waged by doctors. If there was success against coronavirus it was a success by individual doctors and their hard work and not the government.

But in the case of doctors and other healthcare workers, governments across the world are exacerbating woes during an already dismal time. In Kyrgyzstan, where unofficial sources say at least 40 healthcare workers have died of Covid-19, hospital personnel are forced to endure 12-hour shifts for 14-day stretches with no additional pay, then kept in prison-like conditions under quarantine for two weeks, according to a report by Amnesty International.

“I am now working 24 hours a day,” one doctor told the advocacy group.

“I can’t leave because there are so many patients. I am the only doctor. We manage to sleep three to four hours. I have been working like this for 30 days.”

Doctors and nurses across the world have staged protests, demanding better conditions, pay and safety equipment. “Nurses say enough with the clapping and applause,” says Catton. “Get us the personal protective equipment and testing we need.”

But even as it has underscored the healthcare failure of governments, the pandemic has also brought the medical community together across the world like nothing before, as physicians share clinical experiences and researchers race to find treatments and a vaccine — potentially establishing protocols, precautions and treatments that can be applied to the next pandemic to strike the world.

“The science is really accelerating,” says Maria Van Kerkhove, a leading epidemiologist at WHO, in response to a question about the impact of Covid-19 on healthcare. “The science is coming fast and furious. There are papers that come out every day. The studies are becoming sharper. This pandemic accelerates the speed by which WHO and our partners are able to come together.”