The NFL Players Association filed a grievance with the league on Tuesday challenging its recently implemented guidelines prohibiting kneeling during the national anthem.

In May, NFL commissioner Roger Goodell announced the new policy regarding the anthem, which requires all players and gameday staff to stand during the pre-game performance of the anthem but allows them to stay in the locker room. Any violations of the new rules would result in fines against teams.

The NFLPA claims the policy, which was installed without consultion with the union, is inconsistent with the collective bargaining agreement and infringes on players’ rights. 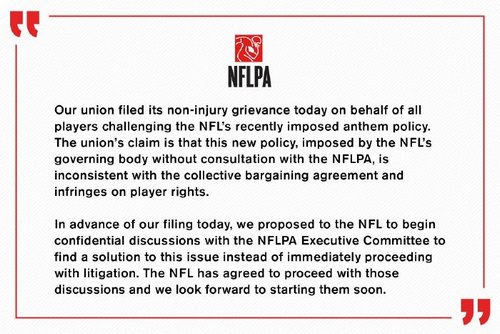 The union said Tuesday it has proposed having its executive committee talking to the NFL instead of proceeding with litigation. The union said the NFL has agreed to those discussions.

An NFL spokesperson said the league is “reviewing the matter” in response to a request for comment from the Guardian.

Dozens of NFL players have knelt during the anthem over the past two seasons in protest against social injustice in the United States. Critics of the protests, including Donald Trump, believed them to be unpatriotic. Trump called players who knelt “sons of bitches” last year.

Trump’s comments sparked a national conversation about patriotism and the nation’s symbols and the use of peaceful protest. The president said in a May interview with Fox & Friends, recorded moments after the NFL announced the new guidelines, that he thought “the people” pushed for the new policy.

Vice president Mike Pence wasted no time claiming the NFL’s decision as a victory for the administration, posting a screenshot of a news story on Twitter shortly after the announcement with the caption: #Winning.