Thousands of Sudanese people have protested in Khartoum and other cities to mark the 40th day since the deadly dispersal of a sit-in outside the army headquarters that killed more than 100 people. 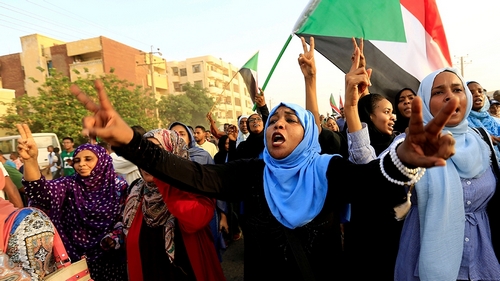 Many protesters were carrying banners that read ‘Justice for Martyrs’, while others held photographs of demonstrators killed in the raid Mohamed Nureldin Abdallah/Reuters

Dubbed the “Justice First” marches, Saturday’s demonstrations were called by the Sudanese Professionals Association (SPA), which has been spearheading the protests since December that led to the removal of longtime leader Omar al-Bashir by the military in April.

Chanting “blood for blood, we won’t accept compensations”, crowds of protesters marched through the main streets of the Red Sea coastal city of Port Sudan, and central cities of Madani and Al-Obeid, witnesses said.

Many protesters were carrying banners that read “Justice for Martyrs”, while others held photographs of the demonstrators killed in the raid.

In the capital itself, witnesses said, a march was staged in the Haj Yousef area, but more were expected later in the day.

The June 3 raid came after talks between protest leaders and military generals, who seized power after al-Bashir’s overthrow, collapsed over who should head a new governing body – a civilian or a soldier.

Protest organisers say security forces killed at least 128 people during the dispersal and subsequent crackdown. Authorities, however, put the death toll at 61, including three from security forces.

The protest organisers hoped that large numbers take part in the marches similar to the massive demonstrations on June 30, when tens of thousands of people flooded the streets in the biggest show of numbers in the uprising.

At least 11 people were killed in clashes with security forces on June 30, according to the organisers.

Saturday’s rallies also put pressure on the ruling Transitional Military Council (TMC) as it is expected to meet the representatives of the Freedom and Change alliance – another union of protesting groups – and sign a power-sharing agreement.

But Ahmed Rabei, a spokesman for the SPA, later said the protest movement called for the postponement of talks until Sunday “for more consultations” within the Freedom and Change alliance on the deal.

The signing ceremony was expected to take place earlier this week, but several delays have been announced, raising suspicions the two parties might still be divided over the agreement’s details.

“In the absence of trust between the Forces of Freedom and Change (FFC) and the TMC, they are trying to change a political agreement into a contractual agreement which is very difficult because any time you do that, you run the risk of making it too loose or too rigid to accommodate any changes,” Walid Madibu, founder of the Sudan Policy Forum told Al Jazeera.

“They are three major areas of disagreement here. Firstly, the FFC insists that the investigators cannot be the perpetrators of violence on June 3. Then they would want an ultimatum on the number of days that both groups should take to appoint a legislative body.

“The third and most important point is the fact that the FFC have differences as to whether the TMC should endorse or approve of the nominees.”

The Sudanese Communist Party, which is a part of the protest movement, criticised the “vague” talks between the TMC and the alliance.

Mahmoud al-Khateib, the party’s political secretary, said his party rejected the participation of the current members of the TMC.

The deal includes a joint Sovereign Council set to rule for a little over three years until elections are held, along with a constitutional declaration, according to a copy of the deal obtained by the Associated Press news agency.

A military leader is to head the 11-member council for the first 21 months, followed by a civilian leader for the next 18.

Videos of the violent military crackdown on peaceful protesters in Sudan surface on social media after a weeks-long internet shutdown ends. pic.twitter.com/YBbuSrvlyH