A tile company created a startling optical illusion-effect hallway to discourage visitors from running down the hallway – and its now gone viral after being shared online.

Manchester firm Casa Ceramica used a clever combination of black and white tiles to make the floor along its hallway floor look as though it is dangerously uneven.

The tiles appear to slope away into a dip, giving the impression that visitors in a hurry could risk coming a cropper on the bumpy surface.

A picture of the quirky floor was posted on Reddit, where some bemused users expressed concern it could be ‘dangerous’ to walk down.

But the floor along the hall is in fact a completely flat surface, and it’s merely the curved shape of each tile and the pattern in which they’ve been laid that gives the appearance of a serious trip hazard.

Casa Ceramica, a company based in Old Trafford, Manchester, has an optical illusion in its building’s entrance, making it look very dangerous

Duncan Cook, the director of Casa Ceramica, shared a picture of the other side of the hallway on Twitter to reveal how they had created the effect.

The tiles were laid in a curved pattern which can be seen from an alternative angle.

The pattern would be clear from that perspective, but a person looking into the building would see an uneven slope on the floor, making it appear pretty dangerous.

Duncan said the illusion was more striking on camera than it is in person, tweeting: ‘It doesn’t look as bad to the human eye, only really come to life through the camera.’ 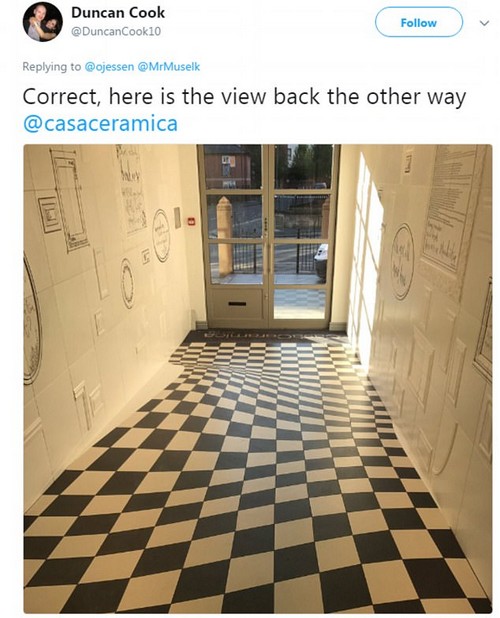 The company’s director Duncan Cook shared a different view of the hallway, revealing that the tiles had been made into a curved pattern

To prove his point further, he also shared a video of himself walking across the floor without stumbling, proving that is entirely even.

The company also shared footage of a tiler laying the floor, which showed that the tiles were made to look curved.

Despite the company’s explanation, many internet users admitted they would be too scared to walk across the floor. 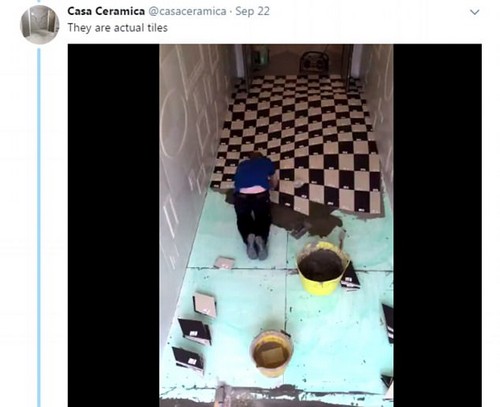 The tiles were made to look distorted, but were actually just normal tiles with a clever coating

One posted: ‘Lots of us won’t go near you if your floor’s like that.’

‘I feel like this will cause more falls than it prevents,’ another commented.

A third wrote: ‘Let’s stop people from running by making it dangerous to run.’

Reddit users had mixed reactions to the tiles, with many saying the pattern would still be dangerous even if the floor isn’t even

This isn’t the first time internet users have been left scratching their heads over bizarre flooring optical illusions.

Last month a tweet went viral when user @MrMuselk shared a picture of a carpet that appeared to be full of holes.

He tweeted: ‘Whoever designed this floor is evil. THAT’S a floor carpet.’

Youtuber Muselk – who records himself playing video games – tweeted this photo of a mesmerising but baffling carpet to his 224,000 followers on Twitter