One of the world’s largest financial institutions, JPMorgan Chase is obviously known more for money than media. But CMO Kristin Lemkau still sees, and is excited about, the bank’s future as more of its own media company.

Since anyone can put anything on YouTube, digital technology has democratized distribution. Chase already has that and now they’ve got content, too, including a self-produced show called “Kneading Dough.”

“We’re not just looking to get our ads out there, although our ads are good,” Lemkau told NFL sportscaster Erin Andrews at a WHOSAY event during the ANA Masters of Marketing. “We want to have real shows where people understand why Chase is there and I don’t have to put my ad in the middle of someone else’s money episode.” 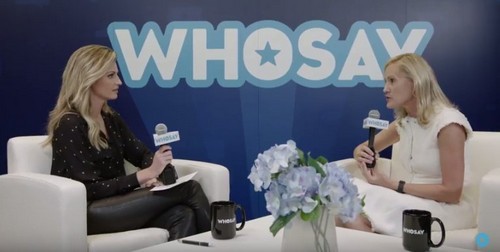 “The evolution of the ad unit”

Lemkau explained that in the past, when brands ran ads on TV, people were generally going to watch them. Before Netflix, Hulu and even TiVo, you watched shows when they were on. Changing the channel to skip ads meant potentially missing a few minutes of the show.

That’s obviously no longer the case. Last year, Facebook found that 94% of people use their smartphones while they watch TV, so you can’t even guarantee that people are even watching whatever they’re watching.

“Most advertising is still interrupting someone’s experience. That’s why you’ve got people blocking ads and skipping over ads and things that are tricking people into watching their content,” said Lemkau. “Where there are ways that Chase can actually be a part of the show, not in a product placement, I’m going to hold up my credit card. But where if people are interested in making the most of their money, we have a right to be there, and the consumer will accept it.”

The evolution of the ad unit represents that switch from interruptive to permissive. Lemkau considers Google and Facebook to be examples of the latter. Scrolling is easier than changing the channel; if you don’t want to watch an ad, you’re not going to.

“Kneading Dough” features people like tennis legend Serena Williams and Cleveland Cavalier LeBron James. On the surface, they don’t seem particularly relatable, as two of 2017’s highest-paid athletes. However, both come from humble beginnings and became very rich very young, and subsequently made financial mistakes just like everyone else.

“They have a very different set of wealth than your average person, but their journey has been the same and people loved watching it,” said Lemkau.

“People don’t care if content is branded, so long as it’s good,” she added.

To her point, YouTube’s third-top trending video from 2017 was seven minutes of guys landing tricky shots, throwing ping pong balls into cups. That video was actually sponsored content from Oreo to promote the brand’s Dunk Challenge. More than 115 million people have watched it and it’s still not even the top ad from last year. A Samsung India spot takes that honor, having racked up more than 208 million views.

“We want to be the wingman”

People think about money in terms of spending and saving and managing,” she said. “Our brand purpose is to help you make the most of your money and the key phrase here is ‘your money.’”

Being their customers’ financial partner means only advertising in the right places. Lemkau famously championed brand safety by removing Chase ads from fake news sites. She’s also reduced the number of sites the brand advertises on to 5,000. From 400,000.

The entire strategy is to give people the products, advice and tools to make their best financial decisions, and only giving those on the websites that make sense. At the same time, Chase recognizes that the decisions are ultimately the consumers’.

“This is about helping you make the most of your money,” she says. “We want to be the wingman.”

How to open a self-service car wash?

5 Ways to Keep Your Employees Happy During a Crisis