A video captured the heart-melting moment that Maggie, of South Carolina hears for the first time with the assistance of a medical device.

Maggie was born with two birth defects that left her without a fully-formed right ear or inner structures -an ear canal and eardrum – so she can’t hear clearly.

Her family filmed the moment a clinician fitted Maggie with a stylish pink headband that keeps her new hearing aid in place.

At first, she looks around slowly, holding still – which the clinician assures her anxious mother and father is normal as she experiences new sounds – but when her mother calls out ‘Maggie!’ the little girl’s eyes go wide as saucers and she gapes gleefully. 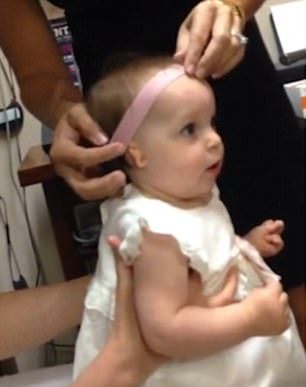 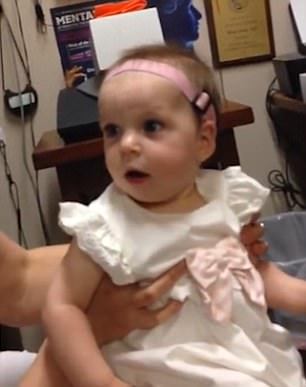 Maggie looked around, contemplating new sounds when she first got fitted for her new hearing aid (left), but gaped in awe at her mother when she first heard her voice (right)

About one in every 5,000 to 7,000 babies are born with microtia – commonly called ‘small ear’ – every year. The inner ear birth defect, called aural atresia, is common in children with microtia.

The conditions commonly occur in just one ear, as was Maggie’s case, but it still hinders hearing.

Reconstructive surgery can give children with both microtia and aural atresia back about 60 percent of their hearing back, but Maggie won’t be eligible for the operation until she is at least three years old.

In the meantime, ‘Maggie is hard of hearing and uses American sign language and also goes to speech therapy once a week,’ her mother, who is not identified in the video, told Newsflare.

But now, Maggie will have a chance to continue to develop her speaking voice and experiencing sounds.

In the video, you can see Maggie’s mental gears turning, as she tried to process more sensory information than she’s ever taken in before.

She appears simply mystified when she looks at the clinician, but you can almost see her heart skip a beat when she hear’s her mother call out to her.

The room erupts with cheers for Maggie’s triumph, and the clinician says ‘that’s perfect!’

Then, incredibly, Maggie understands her mother’s question – ‘Do you want to talk to Dad?’ -and smiles as her mother turns her to face him.

Bedford woman unable to recognise her own sister

The lipstick mistakes that add 10 years to your face