Gal Gadot and a basket of french fries keep Kyle Mooney and Beck Bennett from fretting over nuclear annihilation in a ridiculous unaired sketch from last week’s Saturday Night Live, “The Last Fry.” 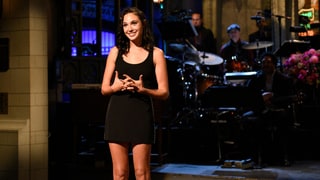 The song and video boast a distinctly goofy Eighties hip-hop vibe as Mooney and Bennett trade bars about hitting up a burger joint to quell their barking stomachs. But as the pair go about satiating their hunger, televisions in the background carry reports of escalating tensions between the United States and North Korea that turn catastrophic the moment Gadot – dressed in fitting Fly Girl duds – saunters into the restaurant. Worse than alerting Mooney and Bennett to the impending missile strike, Gadot chomps down on the last french fry in their basket.

While chaos ensues, Mooney and Bennett jump on top of a car and proceed to do the “Last Fry dance” and chastise Gadot with bars like, “You ate the last fry and it wasn’t for you!/ We thought you were cool and your style’s incredible/ I also thought the last fry would be edible.”