President Trump proposed an “IQ tests” face-off with Secretary of State Rex Tillerson after the nation’s top diplomat reportedly called the president a “moron” and disparaged his grasp on foreign policy.

In an interview with Forbes magazine published Tuesday, Trump fired a shot at Tillerson over the “moron” revelation, first reported by NBC News and confirmed by several other news organizations, including The Washington Post.

“I think it’s fake news,” Trump said, “but if he did that, I guess we’ll have to compare IQ tests. And I can tell you who is going to win.”

Trump’s dare is the latest evidence of what White House officials have described as a breach of trust between the president and secretary of state.

‘Death spiral’: Tillerson makes nice but may not last long with Trump

Reporters asked Trump over the weekend about his relationship with Tillerson.

President Trump said on Saturday, Oct. 7 he has a good relationship with Secretary of State Rex Tillerson. Trump also said his White House Chief of Staff John Kelly is “one of the best people” he has ever worked with. (Reuters)

In the Forbes interview, for the magazine’s cover under the headline “Inside Trump’s Head,” the president teases upcoming economic-development legislation “nobody knows about” that would penalize companies that move operations overseas and offer incentives for those that stay in the United States.

Trump previewed what he called “an economic-development bill, which I think will be fantastic. Which nobody knows about. Which you are hearing about for the first time.” The president said the policy is “both a carrot and a stick.”

Trump also told Forbes that he has purposefully not filled many jobs throughout the federal government, including at the State Department, where many of the top positions remain vacant.

“I’m generally not going to make a lot of the appointments that would normally be – because you don’t need them,” Trump said. “I mean, you look at some of these agencies, how massive they are, and it’s totally unnecessary. They have hundreds of thousands of people.”

Trump’s tweets anger, but do not surprise, Puerto Ricans 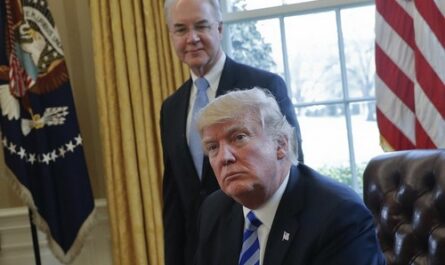