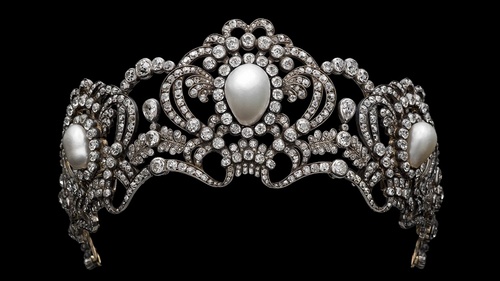 In July the Qatar Museums held the opening of their Pearls exhibition at the State Historical Museum in Moscow as a part of the wider Qatar Russia 2018 Year of Culture Program. Among the treasures on display are 50 new artefacts shown for the first time outside the country. If you love luxurious jewelry – or even if you think you don’t – come and gape, ooh and ahh over 60 spectacular works of art and nature.

The highlights of Pearls exhibition include such masterpieces as a broach made from a sketch by Salvador Dali and Bvlgari pearl earrings worn by Elizabeth Taylor. Royalty watchers will enjoy seeing the tiara of Archduchess Marie Valerie of Austria, the Hanover Royal Tiara and the Lady Rosebery Tiara, made in London in 1878.

But of course, the jewels in the crown of the Qatar Museums collection are the pearls themselves, presented in their natural beauty from ten different mollusks. The curator of the exhibition and consultant on gems and jewelry for Qatar Museums, Hubert Bari, explained how pearls are formed. This secret was only discovered in 1990. Bari shattered the myth that pearls are formed around a grain of sand. He said a pearl is produced during the process of infestation by little worm or a fish inside the shell. When the process of infestation is complete, a pearl is formed.

Bari said that “a pearl takes the color of the shell that produced it. If the shell is white, the pearl is white; if it’s orange – the pearl will be orange.” The average size of a pearl coming from the Arabian Gulf is 5-6 millimeters, with the largest about 8 millimeters.

In France, Bari said, restaurant diners sometimes find small – 1 millimeter – pearls in the mussels they order for their dinner. When this happened to one of Bari’s friends, he offered to pay for the dinner in return for the pearl – which turned out to be worth 80 euros.

But pearls are not just something pretty to look at. Over the centuries the pearl industry was key to the economic development of Qatar. The exhibition presents the history of pearl fishing in Qatar and an overview of the pearl trade in the Arabian Gulf. Long before oil and gas, pearls were a great natural resource that supported the economic growth of the country. Around 5,000 years ago pearl exports became a major source of income for Qatar and helped to develop trade routes. Without the pearl trade, there would have been no foundation for the country’s prosperity and cultural identity.

Russia had its own indigenous pearl industry. River and lake pearls were used in jewelry and textiles to decorate kokoshniks, daily objects and jewelry since the Byzantine era, and perhaps even earlier.

This exhibition is just one of the planned activities for the Year of Culture between Russia and Qatar. Mohammed Al Othman, Director of Public and International Relations of the Qatar Museums, told The Moscow Times that the Museums wanted to consolidate “Qatar’s position as a vibrant center for a bright culture of arts and education in the Middle East and internationally. And for that – art is a very powerful tool because it has no boundaries.”

The exhibition will run until October 1.