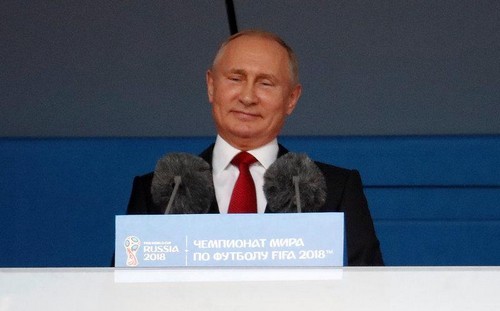 Russia and Saudi Arabia faced off in the first match of the FIFA World Cup, with a historic 5-0 victory for the host team. During the game, Putin’s gestures, seemingly directed at Saudi Prince Mohammed bin Salman seated next to him, sparked a wave of online commentary.

Putin spread out his hands and smiled after every goal, which many saw as an apology to his guest and ally.

But Peskov, in an interview with “Moscow Speaks”, laid the speculation to rest, explaining: “it’s emotions. You don’t apologize for victory in sport.”

Prior to the match, the Russian team was ranked as the weakest of all the World Cup participants.

Despite Russia and Saudi Arabia’s strengthening cooperation, the president gave Mohammad bin Salman a warning when they met before the match: “You know how warmly we think of you, but I think you will understand me: today I can’t wish your team success. The strongest team will win.”

Since the victory, the Russian publics attitude to their team has shifted from disdain to pride. “Everyone who didn’t believe in our team, take that – 5-0!,” Reuters reported as the front page of the Komsomolskaya Pravda newspaper.