Infantino: the world Cup in 2018 will help the development of football in Russia

President of the International Federation of football Gianni Infantino said the high level of organization and friendly atmosphere of the FIFA world Cup 2018 in Russia.

The head of FIFA, said in comments to journalists. Infantino also said that thanks created for tournament sports infrastructure “soccer in the country will make another step forward.”

“The world championship is held on a stunning level. When I see the happy faces of all these people, children, who arrived in Russia from all over the world, I’m happy. Moscow this summer became the capital not only of Russia but of the whole world, became his heart, the heart of football. Cool matches, great organization, everyone is enjoying the football. Russia is a hospitable country. If you walk through towns, you will see men, women, children t-shirts of various teams. 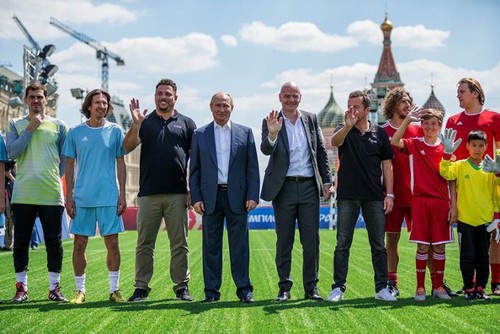 The whole world is watching the world Cup in Russia and gushing about what a fantastic feast of football taking place these days. I think that football is quite popular in Russia, but after the world Cup, with all these latest world-class stadiums, it will become even more popular. And thanks to the new magnificent stadiums, and the infrastructure of football in the country will make another step forward. I have no doubt.”

The world Cup is held in 12 stadiums in 11 cities of Russia from June 14 to July 15, 2018 Russia for the first time in its history is host the football world Cup.

Inter announced the screening of the 2018 world Cup in Ukraine

Inter Media Group, which includes the TV channel inter, confirmed the receipt of rights to broadcast in Ukraine of matches of the 2018 world Cup, which will be held in Russia from 14 June to 15 July.

As indicated in the message, the matches of the world Cup will also display the TV channel NTN. All games will be streamed live.

Earlier media reported that inter will broadcast in Ukraine, the matches of the 2018 world Cup, which will be held in Russia.

Before that, the head of the Board NOTE Zurab Alasania said that the chances of the Ukrainian fans to see on one of the Ukrainian TV channels of the 2018 world Cup, which will be held in Russia, approximately 70 per cent.

It was reported that inter are close to an agreement with National public broadcasting company of Ukraine on the acquisition of a sublicense to broadcast the matches of the 2018 world Cup, which will be held in the summer in Russia.

In turn, Alasania said that the company is discussing the sale of sub-licenses to broadcast matches of the 2018 world Cup with several Ukrainian TV channels.

In the previous two matches, Russia defeated their rivals – the teams of Saudi Arabia and Egypt 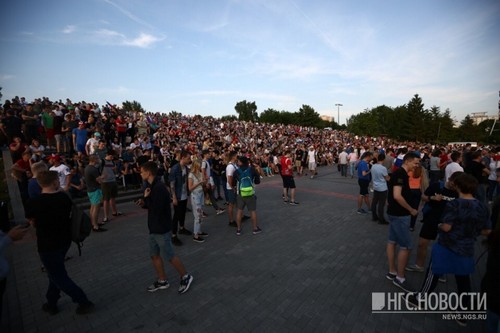 At St. Michael’s waterfront brought together thousands of Novosibirsk to see the third broadcast of the match, which is played by Russia and Uruguay. Beginning at 21:00 local time.

These games were broadcast on St. Michael’s waterfront and collected a lot of fans – at the beginning of June, the Department of physical culture and sports of the Novosibirsk region received an official license by FIFA to broadcast the matches of the world Cup.

Today, the authorities of the Novosibirsk region has decided to extend the showing of broadcasts of the world Cup: on the waterfront you can watch the match of 1/8 final, which hit the Russian team. Is still unknown the exact date: it will depend on the outcome of today’s match – if Russia takes the first place in the group, then the next game will take place from June 30 to July 1 at 1:00, if you will take the second place on 1 July at 21:00.