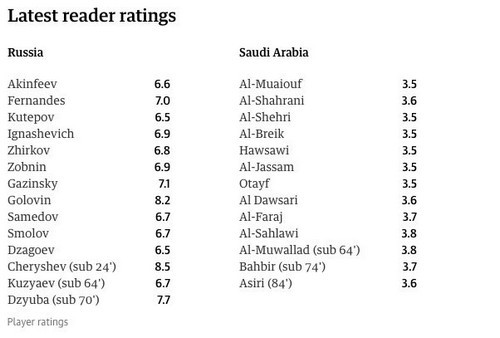 World Cup Football Daily: Don’t forget that we’ll be recording at stumps every night there’s football during this tournament, which means it’s time for me to head off and chew the fat on today’s action, before previewing tomorrow’s.

You’ll be able to download our musings in all the usual places and we look forward to your company. Max Rushden and I will be joined by John Brewin in the studio tonight, while Sid Lowe and Barney Ronay will be on their respective unhackable burner phones from Russia.

Football Weekly is going daily for the World Cup. Here’s @maxrushden in Russia (not really) to tell you what’s on the show tonight. Subscribe here: https://t.co/lDr5zvvxrU pic.twitter.com/VtMmFgNUE0

An afternoon that began with Robbie Williams and Aida Garifullina performing a duet of Angels while standing atop a giant half-football in a short opening ceremony, draws to a close with Russia thrashing Saudi Arabia in the opening match of this summer’s World Cup. A fairly dreary game was studded with some excellent goals and while a Russia team low on confidence can take great heart from this emphatic victory, it’s difficult to put into words just how dreadful Saudi Arabia were.

Ponderous and sloppy on the ball, which they gave away at every available opportunity. Their defence is awful, they are completely toothless in attack and failed to muster a single shot on goal. Igor Akinfeev in the Rudssia goal can scarcely have have made any easier days in the office. Short of taking a few kick-outs, he had nothing to do. Uruguay are next up for Saudi Arabia next Wednesday in Rostov. Russia take on Egypt in St Petersburg on Tuesday. Elsewhere in Group A, Uruguay play Egypt in the Ekaterinburg Arena tomorrow.

The hosts won their first match in eight in fine style, but weren’t up against much in Saudi Arabia.

If I was compiling my player ratings, I’d be giving Denis Cheryshev a nine – despite coming on as a substitute after 20 minutes, he was my man of the match and his two goals were sublime. His first needed two excellent, deft touches to make room for a shot after taking out two defenders and he duly sent the ball screaming into the roof of the net.

His second was a wonderful curling effort into top right-hand corner from the edge of the penalty area into the top left-hand corner. Other star men: Artem Dzyuba impressed after coming on, scoring with his first touch, Mario Fernandes was impressive at right-back and Aleksandr Golovin was irrepressible throughout, rounding off a fine performance with a wonderful free-kick.

Get your player ratings done now, from 1 to 10. They’ll be automatically collated and once you’ve entered your ratings you’ll be able to see the average player ratings from all our readers.

Get your player ratings done now!!!

Peep! Peep! Peeeeeep! It’s all over – Russia have thrashed a fairly abject Saudi Arabia side by five goals in the opening game of Russia 2018. In a match low on quality, most of the goals were a bit special. It’s a great start for the hosts, whose supporters were fearing the worst going into this game. Russia get three points on the board and lead group A.

That is a fantastic goal from Aleksandr Golovin! The Russian midfielder scores with a sublime free-kick, curling the ball around the Saudi wall and wide of the post, only for it to curl back inside and beyond the reach of Al-Mayouf from about 25 yards. That is a wonderful strike!

90+2 min: Cheryshev scores his second ever international goal and they’ve both come in the same game. His first was sublime, showing great close control. His second was also a beauty, sending the ball high past Al-Mayouf with the outside of his left boot from the left side of the penalty area. A tip of the hat also to Artem Dzyuba, who teed him up.

Denis Cheryshev scores the goal of the night, floating the ball into the top corner with an insoucient swish of his left boot from the edge of the Saudi penalty area.

88 min: Aleksandr Golovin gets the first yellow card of the game and it’s for a fairly innocuous foul on Al-Faraj. Two bookings amounts to a suspension in this tournament and disciplinary slates are wiped clean ahead of the quarter-finals.

86 min: Russia win a corner, which Salman Al-Faraj clears at the near post.

84 min: Saudi Arabia substitution: Muhammad Al-Sahlawi off, Muhammad Asiri on. “Hey Asiri, how do we get from 3-0 down against Russia with five minutes to go?” enquires Clive Tyldesley in the ITV commentary box. Zing!

82 min: It would be fair to say this match is over as a contest, in so far as it was ever a contest to begin with. If this Russia team are as bad as many people say they are, then Saudi Arabia must be truly atrocious. They can’t keep the ball, are completely toothless up front and have been unable to lay a glove on a Russian central defence with a combined age of over 70.

76 min: Russia win a free-kick wide on the right and Golvin curls the ball into the penalty area. The ball is headed wide by somebody who wasn’t Dzyuba – apologies, I didn’t see who as I had eyes only for him.

73 min: Having been on the field mere seconds, Dzyuba scores with a wonderful header that I’m fairly certain was his first touch of the ball. The ball was curled his way from the right flank by Zobnin and the big man made no mistake. From eight yards, he beat his Osama Hawsawi and placed an unstoppable header into the bottom right-hand corner. An excellent finish.

Well colous me pink and call me Mystic Meg – Dzyuba scores with his first touch. A header.

70 min: Russia substitution: Artem Dzyuba on for Fyodor Smolov. The rangy 6ft 5in striker could make hay against this extremely dodgy and increasingly fatigued Saudi defence.

68 min: Heart in mouth time for Saudi Arabia as Al-Mayouf spills what should have been a fairly straightforward save and the ball drops to the feet of Smolov. The Saudi goalkeeper bravely dives to smother the ball before the Russian can flick it goalwards.

66 min: Cheryshev heads into the arms of Al-Mayouf after being teed up by Golovin.

63 min: Saudi Arabaia send on their first subsitute. Every country has their “Messi” and Fahad Al-Mulwallad is Saudi Arabia’s. Indeed, he was a surprise omission from today’s starting line-up. A winger by trade, he replaces Abdullah Otayf and takes up a central position, with Mohammad Al-Salawi moving wide.

61 min: We pass the hour mark and Russia still enjoy a comfortable lead, their goalkeeper Igor Akinfeev yet to make any kind of save.

58 min: Saudi Arabia wina free kick in a good position, wide on the right. Al-Jassim curls the ball across the penalty area, but Salman Al-Faraj’s header is half-hearted and doesn’t trouble Russia goalkeeper Igor Akinfeev in the slightest.

54 min: Saudi Arabia enjoy a spell of possession inside the Russian half, but are struggling to find any kind of killer boy. Eventually, the ball is whipped across the edge of the six-yard box from the right flank by Salem Al-Dawsari, but despite stretching every sinew, Taisar Al-Jassim is unable to poke it goalwards.

52 min: Golovin shoots over from about 20 yards after Saudi Arabia lose the ball yet again. They like to play possession football, but seem utterly incapable of doing so… which is a bit of a problem for them.

50 min: Saudi Arabia lose the ball high up the field again and Yuri Zhirkov plays a long pass in behind their centre-backs for Smolov to chase. He wins his team a corner. Zhirkov sends the ball into the mixer, where Osama Hawsawi clears with a meaty header.

48 min: Golovin tries to curl a cross in behind for Smolov, but overhits his pass. The striker scampers towards the touchline but is muscled off the ball by Mohammad Al-Breik.

48 min: A slow start to this second half, with the ball rarely leaving the middle third.

46 min: Russia get the ball rolling for the second half, with no changes in personnel on either side.

That Cheryshev goal: Some of the Saudi defending has been little short of atrocious and Mohammad Al-Breik and Omar Hawsawi were both culpable for the second Russian goal. As Cheryshev picked up the ball on the left side of the Saudi penalty area, both defenders lunged in, committing themselves completely and allowing the Russian substitute to make room for a shot and rifle the ball into the roof of the net. 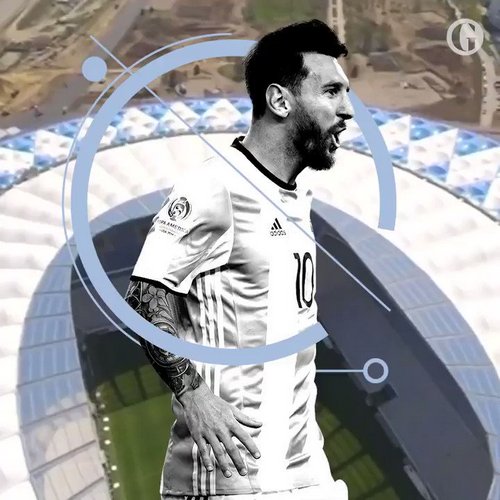 Alan Dzagoev update: This, from Julian Borrill: “He came on as a substitute in all three group games in the 2014 World Cup, but missed both the 2016 European Championship and 2017 Confederations Cup with injury.”

The hosts go in for their half-time break with a two-goal lead and it’s little more than they deserve. Yuri Gazinsky headed them into the lead on 12 minutes, before Denis Cheryshev doubled their lead 31 minutes later. He had come off the bench previously to replace the luckless Alan Dzagoev, who was forced off with a hamstring injury.

45+2min: We’re into the second of two minutes of added time.

44 min: Denis Cheryshev has been very impressive since coming on and he scores a fine goal to make it 2-0 to Russia as we approach half-time. With Russia on the counter-attack and a three-on-two advantage, he picked the ball up on the inside left channel from Smolov. He cut inside and took a touch as two defenders dived in, selling themselves completely. With the goal at his mercy, Cheryshev proceeded to blast the ball into the roof of the net from about 12 yards.