In an effort to get students back in school, a medical centre in rural northeast Georgia decided to let teachers, bus drivers and cafeteria workers from a local district sign up to get vaccinated.

The act ended up costing the facility in Elberton, Georgia, its vaccine supply all together.

On Thursday, the Medical Centre of Elberton announced that the Georgia Department of Public health would be suspending all shipments of the vaccine to the facility for six months.

The centre violated policies by inoculating people who were not eligible, the state agency said in a statement to WYFF, noting that the state’s current phase only includes health-care workers, staff and residents at long-term care facilities, residents older than 65 and law enforcement.

The move has angered community members and staffers at the medical centre, who argue the state is punishing not just the facility but the entire community.

“I’m pretty pissed about it because we are a tightknit community,” Brooke McDowell, an administrator at the medical centre, told the Atlanta Journal-Constitution. “Our community is relying on us to vaccinate them, and our state has decided, during a pandemic, to suspend our privileges.”

There have been more than 890,000 cases of Covid in Georgia and more than 13,800 deaths, according to The Washington Post‘s coronavirus tracker. There have been 2,067 cases of the virus in Elbert County as of Thursday and 43 deaths. So far, Georgia has administered almost 660,000 first doses of the vaccine, according to The Post’s vaccine tracker. Almost 90,000 people are fully vaccinated. 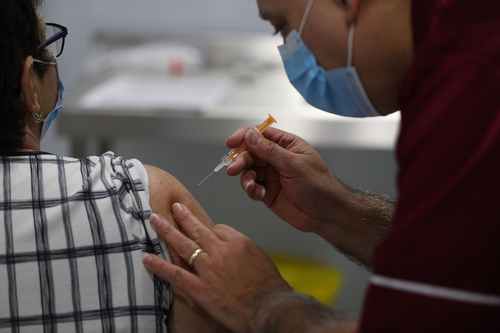 Georgia Republican Governor Brian Kemp pushed back after nearly a dozen superintendents of Atlanta area school districts signed a letter this week asking him to allow teachers and education staff to get the vaccine. The governor said the state has not received enough doses to include them yet.

Studies have shown that remote schooling has put an emotional toll on students. It has been especially hard for children in low-income families, or those with special needs, learning differences or social struggles. It is also hard for children who thrive on routine and social interaction that in-person schooling provides.

There has also been a rise in teen suicides. Earlier this week, a school district in Nevada said it voted to bring students back for in-person classes after 19 students committed suicide over the span of nine months, CNN reported.

Many children in Elbert County, which has a population of about 20,000 people, live in low-income households, McDowell told WYFF. Almost 30 per cent of people in the county live below the poverty line, nearly double the rate of the state, according to census data. Many students do not have Internet access at home, making remote schooling almost impossible and in-person schooling more pressing.

“We are thankful for our local emergency management team and the Medical Centre of Elberton which began working closely with our school district in September to develop a vaccination plan designed to meet the needs of our community.”

Georgia health officials first learned of the medical centre’s decision to vaccinate teachers on Tuesday, prompting them open an investigation. After confirming that teachers had received vaccines, the department said it would suspend vaccines to the centre until 27 July.

Some teachers blasted the state over the move.

“I think it’s ridiculous,” David Bennett, a high school drama teacher, told WSB-TV. “I believe in giving us the protection we need to do the jobs that we have to do each and every day.”

The medical centre is one of five facilities in the county listed as administers of the vaccines, according to a database of state facilities compiled by the Georgia Department of Public Health. It has received the most doses of the Moderna and Pfizer vaccines in Elbert County.

McDowell told the Associated Press that the Medical Centre of Elberton has vaccinated about 170 school system employees out of more than 1,200 doses administered so far. In a statement, the facility said there are enough doses left to provide second inoculations for those who received their first dose and are hoping the punishment is “temporary.”

The medical centre has appealed the state’s decision. It is unclear if or when they will received a decision. Harry, Meghan to delve into tough royal split with Oprah