German Foreign Minister Heiko Maas on Monday praised “significant progress” in solving the separatist conflict in eastern Ukraine, as he met with his Ukrainian counterpart in Kiev.

Germany is a key player in what is known as the Minsk peace process aimed at ending the longrunning conflict with Moscow-backed separatists in the east of the ex-Soviet country.

“Significant progress has been made recently,” Maas said during a joint press conference with Ukraine’s Foreign Minister Dmytro Kuleba.

He praised an ongoing ceasefire that had lasted longer than then previous ones and “good progress” on prisoner exchanges and de-mining activity.

No Ukrainian soldiers have been killed or wounded since the latest ceasefire between Kiev’s troops and the separatists began in late July.

Since the conflict broke out in 2014, there have been numerous attempts to end the fighting but most ceasefires do not hold long enough to pave the way for further peace talks.

Maas said the foreign ministers of France, Germany, Russia and Ukraine might have talks next month to discuss further steps to end the conflict, including the restoration of Kiev’s control over its borders and the holding of local elections. 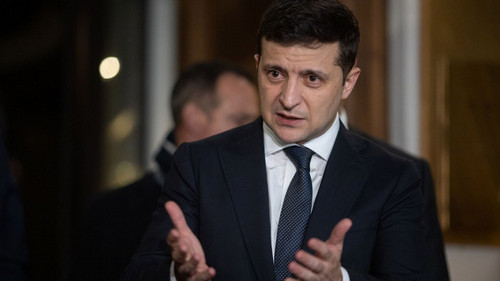 Later in the day, Maas met President Volodymyr Zelensky, who expressed hope that the ministers’ talks would be followed by a meeting of the leaders of the four countries.

“Ukraine supports the German position that the summit of leaders should take place at the end of September,” Zelensky’s press service quoted as saying him in a statement.

More than 13,000 people have been killed in the conflict between Kiev’s forces and separatists in the Donetsk and Lugansk regions, which broke out following Moscow’s annexation of the Crimean peninsula in 2014.

Kiev and its Western allies accuse Moscow of supporting the separatists with troops and arms, a claim the Kremlin denies.

Ukrainians, including veterans of the conflict, marched in the capital Kiev to mark the country’s independence day Monday.