Some California residents are standing their ground and refusing to leave their homes as fires continued to burn across the state.

Nine people are so far confirmed dead, and 19 are missing, after weeks of record heat fueled the continuing crisis, with almost 15,000 firefighters currently up against 28 major wildfires.

Mandatory evacuation orders were issued by Plumas, Butte and Yuba County Sherriff offices this week. During a tour of the damage on Friday, Governor Gavin Newsom said California was currently battling five of the 20 most destructive fires of the past century, with more than 3 million acres destroyed this year alone.

Despite the threat of danger, some people are refusing to run.

James Hancock, 52, and wife Eleonore Davis, 62, who live on a Native American reservation near the town of Tollhouse, under an evacuation order for the nearby Creek Fire, said they’re “not leaving”. 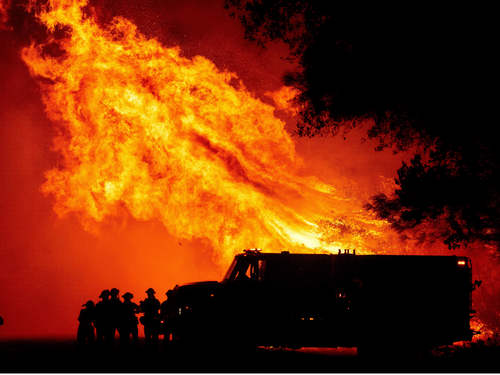 While their children and grandchildren evacuated, AFP reports, they stayed with no water and no electricity in the central California home near Fresno, near the Sierra National Forest.

“Our ancestors didn’t have any of that and they did fine,” Mr Hancock said. “The police have come, they ask me if I know the evacuation procedures. They come often because there has been some looting.”

The Hancocks are one of 44 families that remain on the Cold Springs Rancheria of Mono Indians reservation, as some prepared to evacuate should the fire get close.

Ronald Bugskin, 50, has a trailer packed should the wind change and the fire turn towards Tollhouse.

“I hope I don’t have to leave,” Mr Bugskin told AFP.

The Creek Fire has burned more than 175,000 acres (274.8 square miles), six times the size of San Francisco, and is not expected to be contained until mid-October, according to Cal Fire.

More than 360 buildings have been destroyed and 14,000 are under threat.

Cal Fire spokesman Daniel Ramey told AFP that he was aware evacuating was frustrating for locals, but that they always recommend they leave if they’re in warning areas.