A crushing re-election victory for Belarus President Alexander Lukashenko in disputed polls followed by anti-government protests seeking to oust him, here is a recap of a week of drama in the ex-Soviet country.

His main rival is the 37-year-old political novice Svetlana Tikhanovskaya, who decided to run for president after her blogger husband Sergei Tikhanovsky was jailed and barred from contesting.

Anti-government protests break out that are violently repressed by police, leading to some 3,000 arrests and dozens of injuries. 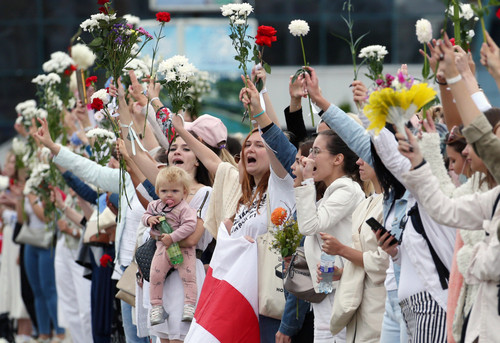 The next day, the first official results give victory to Lukashenko with 80% of votes, far ahead of Tikhanovskaya with 10%.

Tikhanovskaya claims victory and calls on Lukashenko to step down.

Russia, China and Venezuela welcome Lukashenko’s re-election, but other countries and the European Union question the fairness of the vote and condemn the crackdown on protests.

For a second night, demonstrators clash with police in Minsk and other cities, leading to some 2,000 arrests.

One man dies when an explosive device goes off in his hand, police say, confirming the first fatality of the post-election protests.

On Aug. 11 a distressed-looking Tikhanovskaya says she has made a “difficult decision” to leave her country for Lithuania.

In Minsk, state media releases a video showing Tikhanovskaya urging supporters not to protest, but her allies say it was recorded under pressure.

The interior ministry on Aug. 12 says police in the city of Brest used firearms against a group of protesters.

Officials confirm a second death in the unrest. They say a 25-year-old man died after he was detained on Aug. 9 for taking part in illegal protests and sentenced to 10 days in prison.

On Aug. 13, after a fourth night of unrest, authorities say they have made 700 fresh arrests.

Russia accuses outside forces of attempting to destabilize Belarus.

Witness accounts of the torture of jailed protesters spread.

On the 14th, Tikhanovskaya calls for “peaceful” protests in all cities at the weekend.

Workers in several factories walk off the job.

Lukashenko accuses Poland, the Netherlands, Ukraine and Russian opposition figures of being behind the protests.

At a meeting in Brussels the European Union approves sanctions against those involved in the repression and electoral fraud.

On the 15th, Lukashenko says that his Russian counterpart Vladimir Putin has promised to help maintain security.

On the 16th, tens of thousands of people gather in Minsk, in what is the biggest ever opposition rally in the history of the country.

He tells workers at the Minsk Wheel Tractor Plant (MZKT) that he is ready to transfer powers under a new constitution within one or two years.

Later in the day, he adds that new presidential elections, one of the key opposition demands, will be held after Belarus adopts a new constitution.

Tikhanovskaya says in a video from exile in Lithuania she is ready to take over the country’s leadership. The opposition calls a strike.

Britain, among others, says it does not accept the results of the election and intends to sanction those responsible for the repression.