President Joe Biden said Monday he is “very concerned” by Moscow’s crackdown on opposition leader Alexei Navalny and other actions, but said the United States and Russia need to cooperate on nuclear arms control.

Speaking after mass arrests of people demonstrating across Russia this weekend against President Vladimir Putin and the jailing of Navalny, Biden said he was “very concerned.”

However, he said that talks on extending the soon-expiring New START nuclear arms treaty also have to be prioritized.

“I find we can both operate in mutual self-interest of our countries as a New START agreement and make it clear to Russia that we are, we are very concerned about their behavior,” Biden told reporters at the White House. 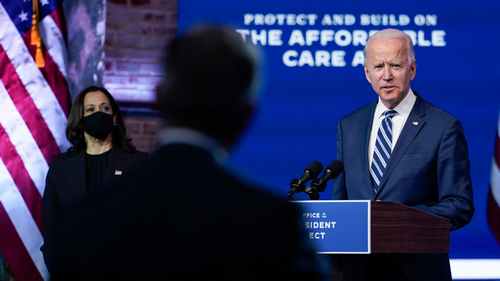 Biden also referred to the huge hack of U.S. computer networks, which has been blamed on Russia, and reports that Russia had offered the Taliban bounties to kill U.S. soldiers in Afghanistan.

“I have asked the agencies in question to do a thorough read for me on every one of those issues, to update me precisely where they are, and I will not hesitate to raise those issues with the Russians,” he said.

Earlier, White House Press Secretary Jen Psaki would not specify what Biden’s response might be, saying only his options were open.

“As has always been the case, the president reserves the right to respond in the time and manner of his choosing. And I’m not going to take options off the table from here,” she told reporters.

On the issue of Paul Whelan, a U.S. citizen convicted on spying charges in Russia last year and sentenced to 16 years of hard labor, Psaki indicated that the Biden administration would take a different tack to the previous Donald Trump administration.

“Certainly we don’t plan to follow the same pattern of the last administration,” she said.

“The United States does not and will never recognize Russia’s purported annexation of the peninsula, and we will stand with Ukraine against Russia’s aggressive acts,” Biden said in a statement marking the anniversary of the Russian invasion of Crimea.

“The United States continues to stand with Ukraine and its allies and partners today, as it has from the beginning of this conflict. On this somber anniversary, we reaffirm a simple truth: Crimea is Ukraine,” Biden said.

Russian troops seized the Crimean peninsula on the Black Sea coast of Ukraine in 2014 and President Vladimir Putin then incorporated the region under Moscow’s rule.

Simultaneously, the Kremlin backed an armed uprising in eastern Ukraine where pro-Russian separatists declared independence sparking a war that continues to simmer with swaths of territory remaining out of the Ukrainian government’s control.

In the latest fighting, two people were killed and two injured, the government in Kiev said Wednesday.

The latest casualties came as Kiev accused Moscow and the separatists of using heavy weaponry and ramping up attacks in violation of a ceasefire agreed in July of last year.