When Irma Veller, a 44-year-old transgender woman, found out about a new Russian law that would bar transgender people from changing their gender on their birth certificates, she decided it was finally time to leave the country.

“I understood that my life is of no value here anymore,” Veller told The Moscow Times last week prior to her departure to seek political asylum in a destination she asked not to be named.

In a country that classifies them as mentally ill, Russian transgender people, who are not even allowed to drive, have long faced discrimination. But proposed amendments to Russia’s Family Code on “strengthening the institution of the family” will make their lives even more difficult, activists and rights groups say.

Commonly referred to as “Mizulina’s law” after Yelena Mizulina, the conservative lawmaker who spearheaded its development, the legislation will be considered by the State Duma, Russia’s lower house of parliament, later this month.

In recent years, Mizulina has also successfully lobbied for the notorious 2013 law banning “gay propaganda,” as well as efforts to decriminalize domestic violence. Her latest push to enshrine a traditional understanding of family, which primarily seeks to ban same-sex marriage and adoption, came in July, just days after Russians approved a set of amendments to the Constitution that include a clause defining marriage as a heterosexual union. 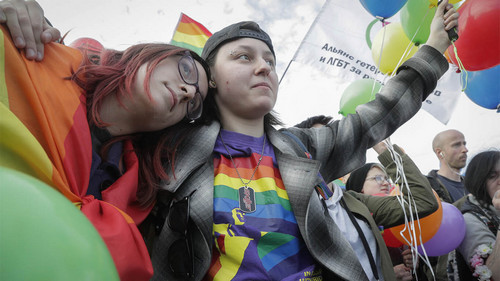 But in explicitly banning same-sex marriage and adoption, the amendments go the extra mile by barring transgender people from officially changing their gender. In this way, rights group say, lawmakers will prevent even heterosexual trans people from getting married, because their original birth-assigned gender would make their marriage same-sex on paper.

“I can’t think of any other explanation,” Tatiana Glushkova, a lawyer with the Transgender Legal Defense Project, said of the decision to ban gender changes. “They have a fantasy in their heads that people change their documents in order to enter into a same-sex marriage.”

Critics say the move came as part of a package of sweeteners for traditionalists aimed at strengthening President Vladimir Putin’s support going into his third decade in power, building on a longer trend of preserving “traditional family values.”

But if for lawmakers the move was a neat trick, the amendments will open up a Pandora’s box of complications for the country’s transgender people. For one, besides barring future changes in gender, some transgender people who have already made the change may even have to return their new birth certificates.

That’s because for years in Russia, until the Health Ministry developed a standardized procedure in February 2018, gender changes were decided on a case-by-case basis.

After receiving the required psychiatric diagnosis, transgender people would visit their local civil registry offices. But while some offices would immediately make a change to the person’s birth certificate on that basis, others would first require the person to get court approval.

According to Glushkova, while most gender changes prior to February 2018 were made with court approval, Mizulina’s law would render the changes made without court approval void. If the bill is approved, those people will be required to change their birth certificates back to their originals by Jan. 1, 2022.

“It shows that the lawmakers don’t even understand the process involved for changing gender in Russia,” Glushkova said. “These amendments shouldn’t be accepted simply on technical grounds, not to mention the human rights violations.”

Rights groups say that the proposed legislation is riddled with similar legal flaws that would leave transgender people on uncertain ground in other areas too.

Eva Shteiner, a 40-year-old transgender woman who for years has consulted transgender people on Russia’s Family Code, said the amendments, for instance, are not clear on whether they will retroactively annul marriages like hers. Shteiner, who was assigned male at birth and changed her documents in 2013, married her wife in 2001, with whom she is raising four children.

Even before Mizulina’s law, Russia did not formally recognize gay marriage. But some couples who married abroad were able to register their marriages back home through a legal loophole. If the law is passed, that loophole would be closed.

There was also previously no law explicitly banning same-sex couples from adopting children, though those couples were exposed to criminal negligence charges under the “gay propaganda” law. That possibility will now be officially barred, too, including for families like Shteiner’s.

Yekaterina Messorosh, a trans activist at the St. Petersburg-based T-Action transgender rights group, said that the group has seen a significant increase in calls to their counseling hotline since the law was introduced.

What is ultimately at stake, Messorosh said, is not even so much the legal complications that will follow but the signal that the Russian state will send with the legislation.

“It is primarily aimed at declaring LGBT people — and in this case, trans people separately and especially — second-class citizens,” she said.

While there is no guarantee that the law will pass in its current form — it has to go through three readings in the State Duma before it can be voted on in the Federation Council and signed by Putin — transgender people like Alan Leongard, a 25-year-old Muscovite, are bracing for the worst-case scenario.

“If the state limits transgender people’s rights, many people will see a reason to treat them accordingly,” he said.

Which is precisely why Veller felt it was finally time to leave.

“What angers me the most is I pay taxes just like everyone else,” she said. “But I’m not treated as an equal citizen.”