A man dressed in medieval clothing killed two people and injured several others in a stabbing rampage near the provincial legislature in Quebec City on Halloween night.

Police arrested a suspect in his mid-20s but told residents in the mostly French-speaking Canadian city to remain inside with the doors locked because an investigation was underway.

Francois Legault, the premier of Quebec, said Quebec “is waking up after a night of horror”.

“Words fail me to describe such a tragedy. I offer my condolences to the families of the victims,” he tweeted.

Justin Trudeau tweeted a response to the attack and thanked the emergency services.

“My heart breaks for the loved ones of the two people killed in last night’s horrific attack in Quebec City,” the Canadian prime minister tweeted.

“I’m also wishing a full recovery to the injured. We’re keeping you in our thoughts and will be there for you.”

Police responded to reports of stabbings near the National Assembly shortly before 10.30pm. 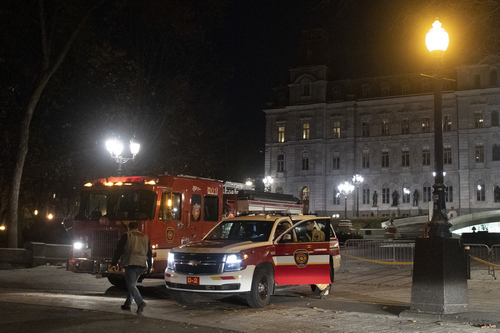 They launched a manhunt and the suspect was arrested shortly before 1am in the city’s Old Port.

He was found lying on the ground, barefoot and hypothermic, according to Quebec’s Le Soleil newspaper.

Victims were discovered at several locations, including near the Chateau Frontenac hotel, and on du Tresor Street and des Remparts Street, according to Radio-Canada.

Five people with injuries were taken to hospital, and a spokesperson said their lives do not appear to be in danger.

Their identities and ages were not released.

Police spokesperson Etienne Doyon said: “On behalf of the Quebec City police, I want to offer my sincerest condolences to the loved ones and families of the people who died today.”

There were no details on a possible motive for the stabbings and it remains unclear if the attacks were random, but police said: “Nothing indicates to us that the suspect would have acted for motivations other than personal.”

Carlos Godoy, who lives in the area, said police K-9 units had searched his garden as they hunted for the suspect.

“It’s a full moon, it’s 31 October. It’s Halloween, and it’s a lockdown weekend. No one should be out on the streets,” he said.

“And I’m in an extremely quiet neighbourhood because there are no tourists nowadays.”