Brain stimulation has long been touted as a way of preventing dementia.

Now, scientists have tested an unusual method of keeping the mind active in their quest to halt the devastating disease in its tracks.

Older adults were asked to either learn how to play the piano or complete quests on Super Mario 64 for half an hour each day.

And Canadian researchers discovered that playing the popular children’s video game was the most effective method.

The classic game, adored across the world, sees players running around an open-world trying to collect stars during various missions.

Completing the puzzles and killing enemies as ‘Mario’ – the famous character – for five nights each week can boost memory, scientists found.

They discovered that Super Mario 64 helped to increase gray matter in the brains of older people who took part in the study.

Gray matter plays a vital role in controlling memory and decision-making, and is known to decrease in the early stages of dementia. 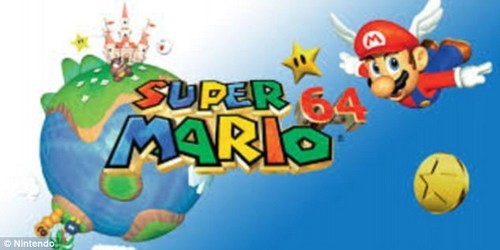 The classic game, adored by children, sees players running around an open-world trying to collect stars during various missions

The effects were only noticed for those playing Super Mario 64 – despite another group being taught to play the piano for the first time in their life.

The findings, published in the journal PLOS ONE, involved 33 participants who were randomly assigned to one of three groups.

The volunteers, aged between 55 and 75, either played Super Mario 64, had piano lessons for the first time in their life or took part in no task.

Scientists, led by Professor Gregory West at the Université de Montréal, asked them to perform their task for 30 minutes each night for five nights a week.

Professor West believes the findings could be used to potentially discover ways of how to protect aging adults from the onslaught of dementia.

He said: ‘3D video games engage the hippocampus into creating a cognitive map, or a mental representation, of the virtual environment that the brain is exploring. 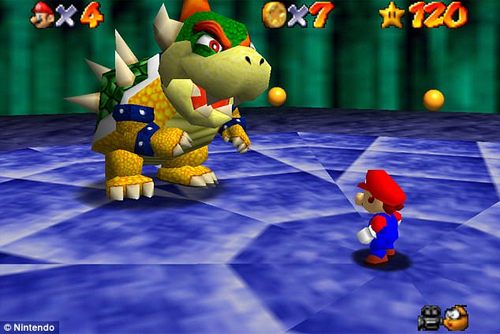 Completing the puzzles and killing enemies as ‘Mario’ – the famous character – for 30 minutes five nights each week can boost memory, scientists found

Popular brain training programs do not ward off the effects of aging or make the user any smarter, research claimed in July.

University of Pennsylvania, researchers found brain training alone does not have an influence on one’s decision-making process or cognitive functions.

These games have risen in popularity in recent years, promising to improve memory, attention, and even ward off dementia through routine exercises.

Companies selling the programs have created a multi-million dollar global industry aimed at baby boomers entering their twilight years and desperate to cling on to their memory.

But according to the study, people who habitually used such games saw no more cognitive improvement than people who did not.

‘Several studies suggest stimulation of the hippocampus increases both functional activity and gray matter within this region.

‘Games like Super Mario 64, which activate the hippocampus, seem to hold some potential in that respect.’

The findings back-up previous studies which have shown playing 3D video games, such as Super Mario 64, can boost gray matter.

After six months, the participants were asked to undergo a cognitive performance test and have an MRI scan to measure their gray matter.

Their results were then compared to when they began the study.

According to the MRI results, only those participants in the video-game group saw increases in gray matter volume in the hippocampus and cerebellum.

The former is dubbed the centre of spatial and episodic memory, while the latter plays a major role in motor control and balance.

For those in the piano group, gray matter increased in the dorsolateral prefrontal cortex – an area that controls planning and decision-making.

However, the scientists noticed gray matter was wasting away in those who weren’t asked to perform any task over the six-month long study.