A hard-hitting new TV advert shows how poisons from the tar in cigarettes enter the bloodstream and flow through the body within seconds, causing damage to major organs.

The campaign also highlights how smoking can lead to elevated levels of cadmium – a metal used in batteries – in the blood, as well as cancer-causing nitrosamines and carbon monoxide.

Public Health England (PHE) has released the advert to urge the country’s seven million smokers to have a go at quitting this New Year.

PHE director of health improvement Professor John Newton said people know tar damages the lungs, but it is less well understood that the poisons also reach the other major organs in the body.

Every year smoking kills 79,000 people in England, while for every death, another 20 smokers have a smoking-related disease, he said.

And one person is admitted to hospital every minute due to smoking. 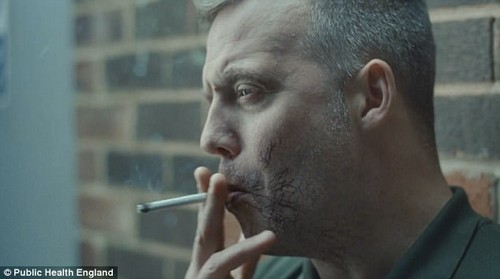 A new TV campaign highlights how smoking can lead to elevated levels of cadmium – a metal used in batteries – in the blood, as well as cancer-causing nitrosamines and carbon monoxide

‘Our new TV ad shows how every cigarette sends a flood of poisonous chemicals through the bloodstream in seconds,’ Professor Newton added.

‘We are urging every smoker to take advantage of the free Smokefree support and quit for good this New Year.’

TV presenter and entrepreneur Hilary Devey, a former investor on Dragon’s Den, appears in a film to support the new advert.

She vows to give up her 40-year habit after taking part in tests and seeing all the toxic substances in her blood.

The 60-year-old describes how she has smoked from the age of around 14, apart from a break of a few years when she had her son and said even suffering a stroke three years ago only led to her stopping temporarily. 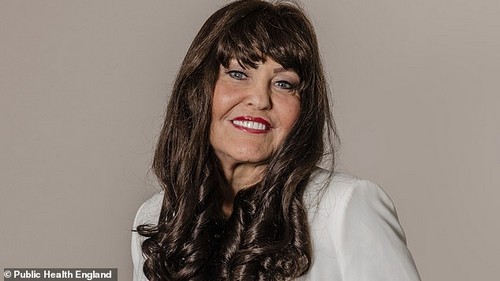 TV presenter and entrepreneur Hilary Devey, a former investor on Dragon’s Den, appears in a film to support the new advert

IS THE END OF SMOKING ‘IN SIGHT’?

The end of smoking is finally ‘in sight’, officials claimed in June following figures that showed another drop in rates across in the UK.

Just one in six adults now regularly light up cigarettes – with 680,000 having given up the notoriously bad habit completely in 2016.

Numbers of smokers have dropped from 19.9 per cent in 2010 to just 15.5 per cent in 2016 in England alone, the Office for National Statistics data showed.

Across all ages smoking prevalence is in decline – with the largest fall being seen in 18 to 24 year olds, with e-cigarette use on the rise.

Duncan Selbie, chief executive of Public Health England, said at the time the UK now has the second lowest smoking rates in Europe after Sweden, proving that the Government’s tobacco control policies work.

‘Like many, I’ve been hooked on cigarettes and ignoring the damage – even though I know the harm I’m doing.

‘I’ve found it extremely difficult to quit for good. Seeing the high levels of poisonous chemicals in my blood from these tests really hit home how dangerous continuing to smoke is – and for that reason, I’m done.’

More than 4,000 chemicals are released into the body with each cigarette smoked, including more than 70 known cancer-causing compounds.

Exposure to cadmium for a long period of time is associated with an increased risk of damage to the kidneys and bones and may lead to lung cancer.

Research has shown that those who smoke 20 or more cigarettes a day are twice as likely to develop kidney cancer as a non-smoker.

Other cancers associated with smoking include cancers of the pancreas, mouth, respiratory and digestive tracts.

Meanwhile carbon monoxide decreases the ability of the blood to carry oxygen, putting a strain on the heart. It is also associated with an increased risk of blood clots and coronary heart disease. 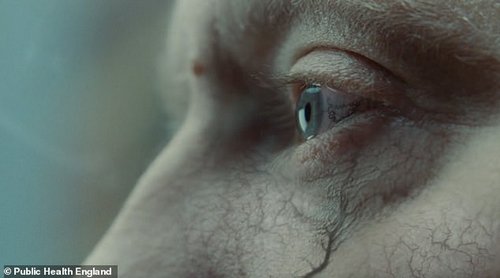 Every year smoking kills 79,000 people in England, while for every death, another 20 smokers have a smoking-related disease

But giving up smoking would see the blood improve, and the body become rid of the harmful poisons which cause major damage to the body.

PHE said there are many ways to quit, including free support from NHS Smokefree.

Face-to-face help, stop smoking aids, a quitting app, email, social media, and SMS support are all available for people to try and find out what suits them.

Health minister Steve Brine said: ‘Smoking kills tens of thousands of people every year and a long term smoker loses an average of 10 years of their life.

‘Although smoking rates are at their lowest level in decades, seven million of us still haven’t kicked the habit.

‘When people see the devastating impact on their health and lives, I hope they will make a change to protect themselves and their families.’

Eating small meals can resist the brain’s urge to overeat

Viagra will cost half as much as Pfizer launch own pill